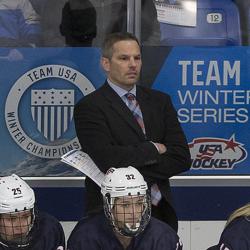 Robb Stauber most recently served as the head coach of the U.S. Women's National Team that won gold at the 2017 International Ice Hockey Federation Women’s World Championship. The tournament marked the fifth time Stauber served on the staff for Team USA at the world championships and the first time as head coach at the event.

Stauber previously served as the head coach for the Team USA Winter Champions Series, a pair of games against Canada on December 17 and 19, 2016. He also served in that capacity for the 2016 USA Hockey Winter Camp from December 12-16, 2016 and the National Team Training Camp from February 28-March 2, 2017.

An assistant coach for the 2014 U.S. Women's Olympic Team in Sochi, Russia, Stauber has been involved with the U.S. Women’s National Team since 2010 in a variety of roles, including coaching, scouting and development of its goaltenders.

He played 10 years of professional hockey, including four seasons in the National Hockey Legaue with the Los Angeles Kings and Buffalo Sabres. The native of Duluth, Minn., also spent time in the IHL and AHL.

At the University of Minnesota, he was the first goaltender to win the Hobey Baker Award (1988). He was also the recipient that year of the WCHA Player of the Year award and was named All-WCHA First Team and All-America First Team. Additionally, Stauber was recognized as WCHA Goaltender of the Year in 1988 and 1989. He represented the U.S. at the 1987 World Junior Championship and 1989 IIHF World Championship.