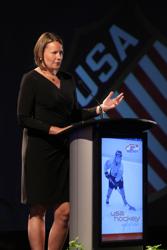 Reagan Carey became USA Hockey’s director of women’s hockey in August 2010. Her primary focus is the management of the U.S. Women’s National Team Program, including elite development efforts of players and coaches. Carey also serves as general manager for all U.S. women’s teams, including the U.S. Olympic Women's Team.

As part of USA Hockey’s development initiatives, Carey has overseen all aspects of player development camps, tournaments and team operations at all levels.

For the two years prior to joining USA Hockey, Carey was the director of fan development and youth marketing for the NHL’s Atlanta Thrashers and NBA’s Atlanta Hawks.

Carey is a member of the IIHF Women’s Committee and is on the Professional Development Council for the American Women’s College Hockey Alliance.

A 2001 graduate of Colby College, Carey played four years of collegiate hockey and volleyball. She was the recipient of the 2010 Colby College Carl E. Nelson Sports Achievement Award.