When Hilary Knight skates onto the ice for the IIHF Women’s World Championship next week in Finland, she won’t be thinking about if her name is spelled correctly on the back of her uniform, if she has the right helmet or if her skates have been sharpened. Hannah Brandt won’t have to wonder if she has the right jersey in her locker. Even as she walks into a locker room on another continent, Amanda Kessel will find have no problem finding her stall.

The reason the U.S. Women’s National Team can focus on hockey instead of logistics is Logan Fischer, one of the team’s equipment managers. His job is to make sure the players, coaches, strength and conditioning team and medical staff can do their job and not worry if they have the items they need.

“He knows what we need. He knows each player and their different needs that are specific to them, which is amazing,” said Brandt, who is going into her fourth world championship. “He is always on top of things during the game, which is the most important thing. We don't have a lot of time to be dealing with equipment issues. He's always on top of it.” 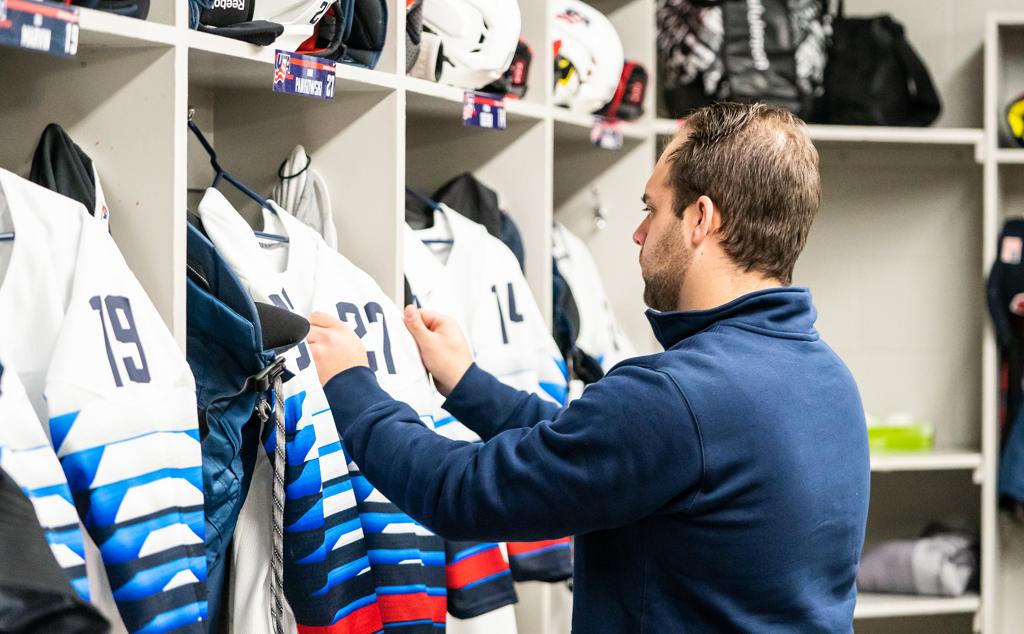 With the Team USA headed to Espoo, Finland, to go after its fifth consecutive world title, Fischer’s job is to make sure the players and staff have everything they are used to having when playing in the U.S. It starts at the airport, when Fischer figures out what equipment they need to take with them, what can go in luggage and what needs to be shipped ahead of time.

Part of what can make this difficult is how before the team arrives at camp, the players are all over the country with their NCAA or NWHL teams.

“Outside of an Olympic year, we're not with them all the time,” Fischer said. “I work at Penn State with the women's hockey team, so it's basically supporting them remotely, and they're all over the place. It's a lot of drop shipping things from our companies, and just making sure our players have what they need to perform.”

On gamedays, Fischer shows up at the arena hours before the team, setting up the locker room before the players show up. He makes sure the lockers have everything each player needs and that the medical staff is fully stocked. Once the players arrive, he’s ready to sharpen skates and fix anything that might have broken or ripped. During games, it’s his job to take on any emergency that comes up.

“We have had skates break right before the national anthem, or right after warmups, and you have to replace the whole bottom part of the skate,” he said. “When you've got an alternate player coming in, you have to figure out what they're going to wear and if you can get things there that fast. You end up overnighting things often.”

Fischer keeps sewing needles and thread with him at the arena and back at the team hotel. His emergency kit has equipment to both fix and sharpen skates, all kinds of glue and, of course, duct tape.

Supporting the national team is a way for Fischer to stay close to the game his father taught him when he was young. He worked at a hockey shop in high school and was the equipment manager as a student at Clarkson University before working with USA Hockey.

“I wanted to do something with hockey, not knowing what it was or what it would become,” he said, "but I am so thankful for this opportunity and love that I get to work with the best players in the world with USA Hockey."