The U.S. Under-18 Men's National Team’s road to a bronze medal at the 2019 IIHF Under-18 Men's World Championship in Ornskoldsvik, Sweden, was filled with record-breaking performances.

At the end of the 11-day tournament, the U.S. defeated Canada to claim bronze, marking the 16th consecutive year that Team USA medaled at the event. The U.S. finished the tournament with a (6-0-1-0/W-OTW-OTL-L) record, with its only loss coming in the shootout during its semifinal matchup against Russia.

Team USA opened the tournament with a 6-1 victory in its opening game against host country Sweden. After falling behind, 1-0, in the first period, the U.S. battled through the loud, Swedish crowd and scored six consecutive goals to win, 6-1.

That evening, Caufield, one of five U.S. players playing in his second Under-18 Men's World Championship, scored a hat trick for Team USA. Other returners, York and Alex Turcotte (Island Lake, Ill.), enjoyed two-point nights as Turcotte scored a goal and added an assist, while York collected two helpers in the victory. John Beecher (Elmira, N.Y.), playing in his first Under-18 Men's World Championship, scored the game-winning goal and added an assist in Team USA's tournament-opening win. Matthew Boldy (Millis, Mass.), also playing in the tournament for the first time, tallied three assists of his own, tying him with Caufield for the team lead in points. Spencer Knight (Darien, Conn.) made 29 saves for the U.S., earning his first win of the tournament.

The following day, Team USA took on Slovakia in its second contest of the tournament. Powered by a seven point performance from Hughes, the U.S. took down Slovakia, 12-5. Six players recorded multi-point games for Team USA in the victory and Cameron Rowe (Wilmette, Ill.) made 30 saves in his first victory of the tournament.

Caufield stayed hot for the U.S. against Slovakia, scoring four goals and adding two assists to bring his tournament totals to 7-2--9 through just two contests. He opened the scoring for Team USA at the 7:42 mark, with Hughes picking up the primary assist. Hughes finished the day with four goals and three assists and brought his tournament totals to 4-4--8, averaging four points per contest through two games.

Including Caufield and Hughes, seven U.S. skaters recorded points for the second consecutive game. Boldy and Turcotte were two of those players, as both recorded a goal and three assists in the contest.

Following the win over Slovakia, Team USA spent Saturday practicing before jumping back into game action against Russia on Sunday.

The U.S. fell behind for the second time of the tournament when Russia tallied two quick goals just 2:08 apart to take a 2-0 lead.

However, Team USA responded quickly, with Hughes scoring 1:44 after Russia's second goal. The U.S. found a way to tie the game at the 14:51 mark when Turcotte took a pass from Boldy and fired a shot into the top left corner to knot the score.

Boldy scored at the 11:55 mark of the second period and the U.S. would lead for the remainder of the contest, getting two goals from Caufield and one more from Matthew Beniers (Hingham, Mass.) late in the third period. Knight made 20 saves for the U.S. in his second win of the tournament.

The point streaks continued to expand for Team USA in the victory over Russia, as Boldy, Caufield, Hughes, McCarthy, Turcotte and York all extended their streaks to three games.

Team USA continued its undefeated run through the preliminary round on Tuesday with a 7-1 victory over Latvia.

After leading, 1-0, at the end of the first period, the U.S. came out of the locker room with a purpose to start the second stanza. Caufield scored twice in the second period, while Team USA, as a whole, found the back of the net four times.

Caufield's first goal of the game was a record-setting one, as he passed Brett Sterling for the most goals by an American in a single Under-18 Men's World Championship with 10. Sterling's record of nine goals was accomplished in eight games, while Caufield scored his 10th goal in just his fourth game of the tournament.

Beecher, who opened the scoring in the first period, added his second goal of the game and York also scored to give the U.S. a 5-0 lead after two.

Knight made 13 saves on 14 shots, earning his third win of the tournament.

Boldy Caufield, Hughes and York all extended their point streaks to four games in the win, while Brink and Trevor Zegras (Bedford, N.Y.) collected points for the second-straight contest.

After an undefeated preliminary round, Team USA found itself scheduled to face off with Finland in the tournament quarterfinals. The two teams met in a pre-tournament exhibition, with Finland defeating the U.S., 1-0.

The second time around, there was no shortage of offense for Team USA, as it defeated Finland, 6-0. Hughes led the way for the U.S., scoring a hat trick and adding an assist.

Beniers opened the scoring for the U.S. at the 6:25 mark of the first period, with Alex Vlasic (Wilmette, Ill.) picking up an assist for his first point of the tournament.

Following the Beniers goal, Hughes recorded a natural hat trick for Team USA, his second hat trick of the tournament. Two of Hughes' three goals were assisted by Zegras, who finished the game with four helpers.

Caufield continued to light the lamp for the U.S., scoring at the 12:06 mark of the third period. With the goal, the Stevens Point native pushed his goal scoring streak to five games, tallying at least one goal in every game of the tournament. Through five games, Caufield's goal total was at 12.

Brink added a sixth goal for the U.S. at the 12:53 mark and pushed his tournament point total to five through three games.

Knight earned his first shutout and fourth win of the tournament, making 21 saves for Team USA.

In the quarterfinal victory, Caufield, Hughes and York extended their point streaks to five games, recording at least one point in every game of the tournament.

Hughes' lone assist was also a record breaker for the Orlando native. With the helper, Hughes passed Clayton Keller and became the all-time U.S. leader for assists at the Under-18 Men's World Championship. Keller recorded 15 assists over two years at the tournament, while Hughes finished with 18.

Furthermore, with four points in the contest, Hughes became the all-time U.S. leader for points at the tournament. Phil Kessel held the previous record with 26 points.

After defeating Finland in the quarterfinals, Team USA was faced with a rematch against preliminary round opponent, Russia.

After a scoreless first period, Russia scored the game-opening goal 18:24 into the second stanza. With the late goal, the Russians went to the locker room leading the U.S., 1-0, with one period left to play.

Just 12 seconds into the third period, Caufield made history. After taking a pass from Hughes, Caufield faked a wrist shot before making a move around the defender and firing a shot top shelf to tie the game.

Furthermore, Hughes' assist on Caufield's goal gave him 17 points on the tournament, breaking Kessel's single tournament record for an American. 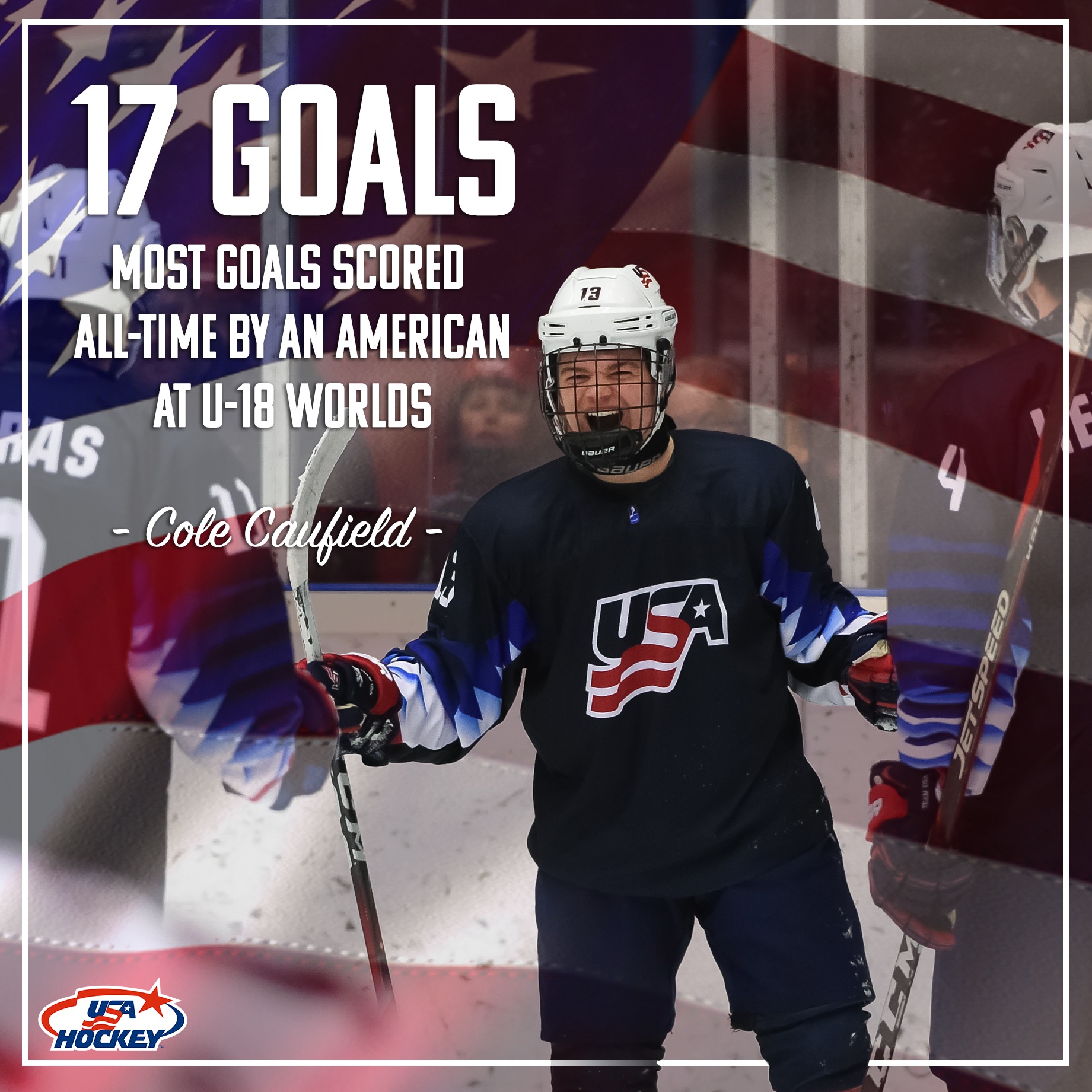 Cole Caufield's first goal of the game against Russia set the record for most goals scored all-time by an American at the Under-18 Men's World Championship.

Caufield was not done with his 17th goal, though, as he scored again just 3:04 after his first goal of the game to put the U.S. up, 2-1. Caufield finished the tournament with 14 goals and 18 on his career at the event.

Following Caufield's second tally of the game, Russia answered at the 17:27 mark to even the score and send the game to overtime.

At the end of regulation with the score tied at two, a 10-minute four-on-four overtime period was conducted. Hughes struck the goal post with under a minute remaining, but neither team could find the back of the net.

After no goals were scored in overtime, the game went to a five-round shootout. The U.S. failed to score a goal and Russia was able to get one shot past Knight to advance to the gold-medal game.

With the loss, Team USA found itself in the bronze-medal game with a matchup against Canada.

With a 16th consecutive medal at the Under-18 Men's World Championship on the line, Team USA showed up to its bronze-medal game against Canada ready to play.

Turcotte opened the scoring for the U.S. at the 8:03 mark after Hughes made a great pass to the back door where Turcotte had a wide open net to fire the puck home and give Team USA a 1-0 lead.

Canada answered at the 19:06 mark and both teams headed into the first intermission with the score tied at one.

Following the goal by Canada, Team USA scored four consecutive goals, including three in the third period. With the four goals, the U.S. held on to defeat Canada, 5-2, and earn a bronze medal.

Hughes took down one last tournament record in the bronze medal game before wrapping up his career at the Under-18 Men's World Championship.

While the U.S. had a five-on-three advantage over Canada, Hughes collected the puck at the top of the left circle and sent a pass to York, who ripped a one-timer into the back of the net.

With the assist, Hughes collected his 32nd career point at the tournament, passing Alexander Ovechkin for the most points all-time at the Under-18 Men's World Championship.

"It's special," said Hughes. "This is a pretty cool tournament and I'm lucky to have been able to participate in it twice. It's been two pretty good runs. It's really cool to be at the top of the rankings. For us to come out with bronze, it's a good ending for us. It felt good to cap things off with a win."

With the win over Canada, Team USA secured a medal at the Under-18 Men's World Championship for the 16th consecutive year.

Caufield, Hughes and York were all named to the Media All-Star Team at the 2019 tournament, while Caufield was named Tournament MVP.

Furthermore, Caufield, Hughes and York all recorded at least one point in every game for Team USA. 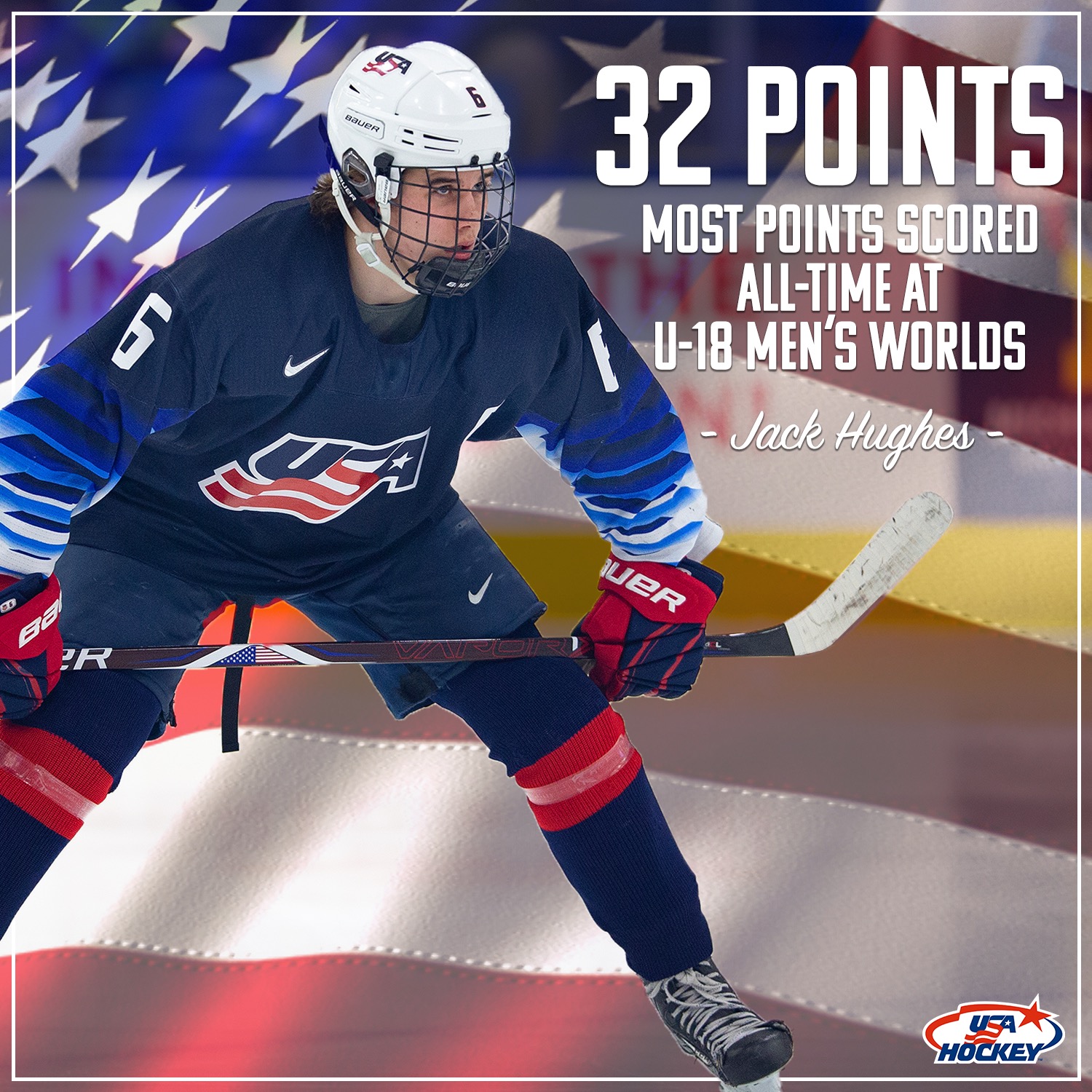 With an assist on Cam York's first goal of the bronze-medal game, Jack Hughes passed Alexander Ovechkin for the most points all-time at the Under-18 Men's World Championship.

Hughes led the tournament with 20 points, Caufield finished second with 18, Boldy finished third with 12 and York finished fourth with 11. No other players in the tournament recorded more than 10 points.