Murphy’s Law: Anything That Can Go Right On The Ice Will Go Right

BEIJING – Abbey Murphy was on the cusp of her 16th birthday as she sat in her Evergreen Park, Ill., home watching the 2018 U.S. Women’s Team strike gold in PyeongChang, South Korea.

Fast forward four years and she now shares an Olympic locker room with many of the same players who inspired her.

“Many of these women are who I looked up to, like Kendall [Coyne Schofield] and [Hilary] Knight. Those are the players that I’ve heard about when I was younger. It’s just really cool to be playing with them now,” Murphy said on the eve of the biggest game of her promising young career.

Murphy is one of a bevy of talented newcomers ready to make their Olympic debut when the puck drops against Finland on Feb. 3.

In her relatively short time with the U.S. Women’s Olympic Team, Murphy has become an integral part of this tight-knit team with her gritty, take-no-prisoners style that contradicts her good-natured demeanor away from the rink. 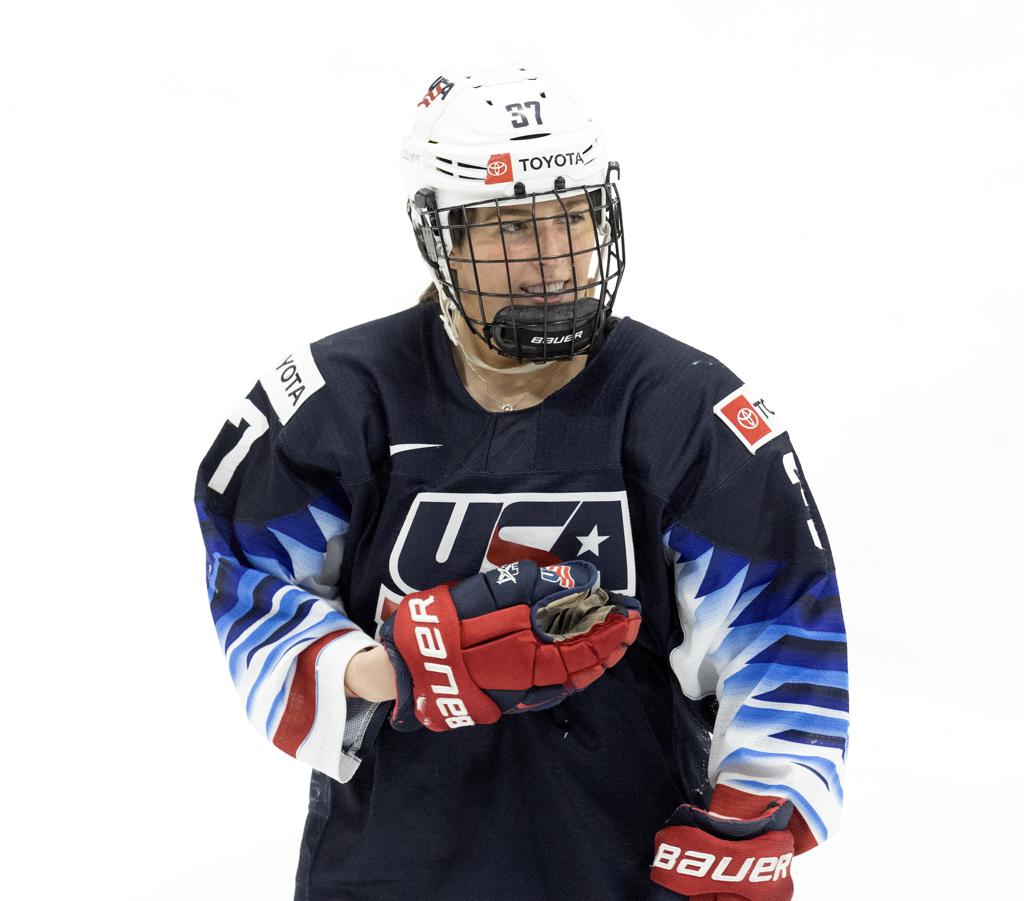 “She’s a spitball, that’s for sure,” said Coyne Schofield, a fellow Chicagoland native. “She has a ton of skill, a ton of grit and a ton of speed. Put it all together and that’s the kind of player she is.

“She brings a spark that I think we were missing when we lost the Lamoureux twins to retirement, which is nice to have.”

Away from the ice, Murphy has worked just as hard to win over those same teammates she once idolized from afar.

“She’s the first one to grab the bags and to help out the medical staff when they need help with whatever it is that they’re doing,” Coyne Schofield added. “She really embraces her role. She’s such a good kid and her personality is definitely contagious.”

Opponents may not speak about Murphy in such flattering terms. She’s one of those type of players that you love to have on your team but hate to play against. Just ask the Canadians, who can feel the hair on the backs of their necks bristle every time she steps on the ice. She has a way of getting under her opponent’s skin with her actions more than her words.

“I honestly don’t say much. I kind of get everything said to me,” she said with a laugh. “I just take it in, keep it there and remember it for later. The worst thing they hate is when you put the puck in the net so I got to keep doing that.”

That’s what head coach Joel Johnson loves about her game dating back to their time winning the gold-medal winning U.S. Under-18 National Team in 2018. He loves the energy she brings to the ice and doesn’t mind her high-wire act when it comes to finding No. 37 in the middle of the fray.

“Some of the best players that have that grit and determination. They play right on the edge but they’re careful not to cross over it because they know if they do they’re in the [penalty] box,” said Johnson, who is careful not to pull back on the reins too hard.

“I think with any player that plays with that style, you have to be careful because that’s one of the best things that she brings to our team. Sometimes you got to let players like that be.”

Still, Johnson loves what she brings to the team and knows he can count on her in any situation.

“Her greatest gift for this particular group is her versatility,” he said. “She can play anywhere in the lineup and do a lot of different things for us. So it’ll be exciting to see her play.”

Murphy’s style is befitting of someone who cut her teeth in the Chicago hockey establishment. She grew up in the Windy City suburbs with two older brothers, neither of whom played hockey. Fortunately she had Tom Pratl, a local high school player, living across the street.

She would see him rollerblading in his driveway and playing street hockey in front of his house and asked her parents for skates of her own. Before long Pratl was teaching her to skate, stickhandle and shoot. Part of the bargain was she had to get between the street hockey pipes so he had a makeshift goalie to shoot on.

“I swear to God I put on those little shinny pads all the time,” she laughed. “But it was so much fun. I was so lucky to have a neighbor like him.”

There was a time, particularly during some of those early morning practices and marathon road trips, that her mom and dad would beg to differ.

“Whenever they see him, they say, ‘This is all your fault,’” Murphy recalled. “It’s really funny. He doesn’t even say he’s sorry.”

Now that their daughter is about to make her Olympic debut, the Murphy’s may want to knock on Pratl’s door and thank him for igniting her dream.

She went on to play with the Chicago Mission where she led teams to USA Hockey National Championship titles at both the 16U and 19U, before enrolling at the University of Minnesota. After a full season with the Gophers, Murphy took a year off to try out for the Olympic Team.

“It’s been so fun to see her career just soar before my eyes. I remember her as a 12U with the Chicago Mission when I was a 19U. To be Olympians together now is amazing,” Coyne Schofield said.

“To see the work she’s put in to get here and her to accomplish her dream, I think it shows the next generation of players who are looking up to her that they can do it too.”