BEIJING - The U.S. Olympic Women’s Ice Hockey Team opened the 2022 Olympic Winter Games with a 5-2 victory over Finland this evening at the Wukesong Sports Centre in Beijing, China.

“I thought we played well,” said Joel Johnson, head coach of the 2022 U.S. Olympic Women’s Hockey Team. “It's always hard in the first game of any tournament, let alone the Olympics, but I was really impressed by our players. I give them a ton of credit. That second period was outstanding and I thought we really controlled the game from that point on.”

Less than five minutes into Team USA’s Olympic opener, Maddie Rooney (Andover, Minn.) scooped up the puck off a deflection in front to preserve the scoreless game right at the start.

Minutes later, Kendall Coyne Schofield (Palos Heights, Ill.) looked to give the U.S. the lead with a shot inside the face-off circle that was kicked away by Finnish netminder Anni Keisala. Hilary Knight (Sun Valley, Idaho) immediately followed that up with a wrist shot from the same spot, but the score remained 0-0 with just over 12 minutes to play in the first.

Amanda Kessel (Madison, Wis.) scored Team USA’s first goal of the 2022 Olympic Games with 9:23 to play in the first. Savannah Harmon (Downers Grover, Ill.) skated the puck down behind the net and passed it off to Kessel, who walked it in front for the goal.

Alex Carpenter (North Reading, Mass.) gave the U.S. a 2-0 lead after she squeaked the puck past Keisala on the power play with 6:59 to play in the first period. Kelly Pannek (Plymouth, Minn.) and Jincy Dunne (O’Fallon, Mo.) took credit for the assists on the play. 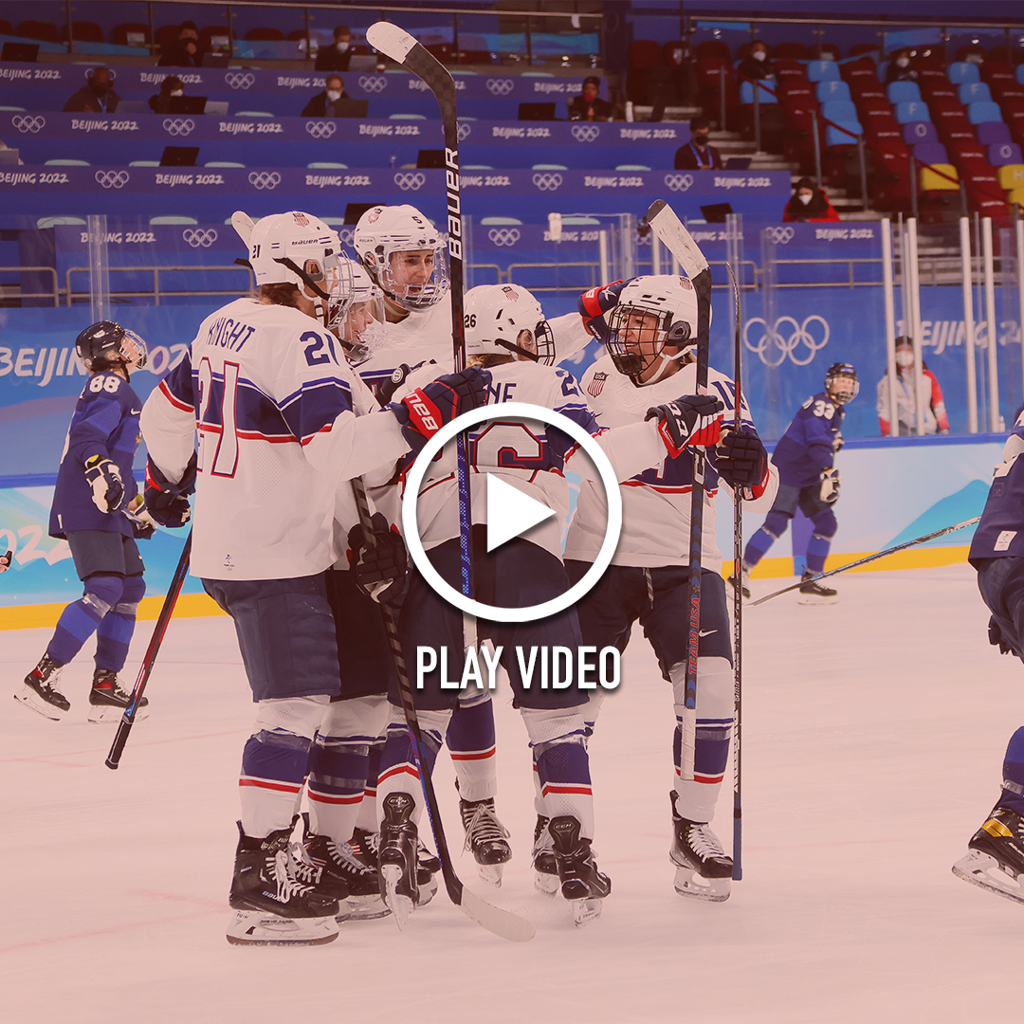 With 16:44 in the clock in the second, Carpenter almost nabbed her second of the game after a backhanded shot in the slot that missed just wide of the net.

Coyne Schofield scored back-to-back goals 1:04 apart to give Team USA a commanding 4-0 lead in the second. With 14:28 on the clock, Coyne Schofield carried the puck into the zone, cut to to the middle and found the back of the net on the far side.

One minute later, Coyne Schofield scored her second of the evening after she tipped the puck in off a Harmon wrister from the point. Hannah Brandt (Vadnais Heights, Minn.) picked up the secondary assist.

The U.S. and Finland exchanged power play opportunities to start the third period. Finland capitalized on the advantage with 16:45 to play, putting the score at 4-1 in favor of Team USA.

Nearing the halfway mark of the final frame, Carpenter added another tally for Team USA, her second of the game, after tapping the puck in off a pass from Abby Roque (Sault Ste. Marie, Mich.).

Finland added a late goal with 2:20 to play in the game to seal the final score 5-2.