The U.S. Olympic Women’s Ice Hockey Team wraps up its preliminary round slate with a meeting against Canada on Tuesday afternoon. Both teams are 3-0-0-0 to start the preliminary round of the tournament. Puck drop is slated for 12:10 p.m. local time and 11:10 p.m. ET the night prior and will be broadcast on USA Network.

The U.S. wraps preliminary-round play with a meeting against rival Canada. The two teams last met in Olympic play in the 2018 gold medal game, with the U.S. winning the contest 3-2 in a shootout. Prior to today's meeting the U.S. and Canada met six times as part of the My Why Tour, presented by Toyota in the months leading up to the Olympics, with Canada holding a 2-1-1-2 advantage.

Team USA moved to 3-0-0-0 in preliminary round play, defeating Switzerland 8-0 behind two goals apiece from Jesse Compher, Hilary Knight and Kelly Pannek. The team opened the first with five goals, scoring its second and third goals just nine seconds apart. 12 different players recorded a point in the victory as Team USA outshot the Swiss, 66-12. In her first Olympic start, Alex Cavallini made 12 saves to record the team's second-straight shutout. 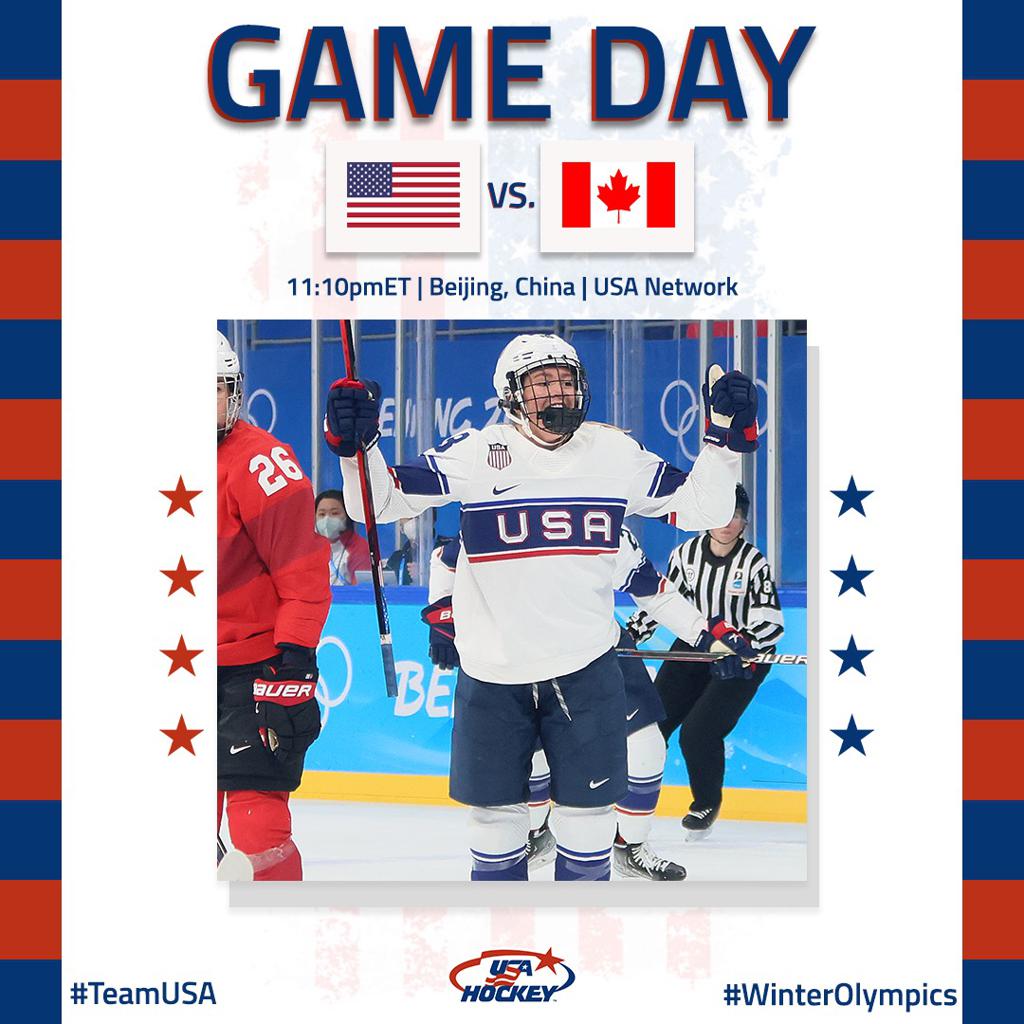 Through the first three games of preliminary round play, 17 different skaters have tallied at least a point for Team USA, with eight scoring at least one goal. 12 different skaters recorded a point in the team's last contest against Switzerland. Jesse Compher, Alex Carpenter and Hilary Knight lead the red, white and blue with three goals on the tournament.

Through three games, Team USA's defense has held opponents to minimal scoring opportunities, yielding just 12 shots in each of the first three games. All three opponents have not recorded more than six shots in a single period, with both Finland and the ROC both being held to two shots in the first period and second period, respectively.

Through three games, the U.S. has yielded only two goals to opponents on the tournament and have shutout opponents in two of three games. Nicole Hensley shutout the ROC, her second career Olympic shutout. Alex Cavallini recorded a 12-save shutout in her first Olympic appearance.

Team USA enters the Olympics as the defending gold medalists for the first time in 20 years. The U.S. topped Canada, 3-2, in a shootout to take home gold in PeyongChang in 2018. Outside the Olympics, the U.S. has won eight of the last 10 IIHF Women's World Championships.