BEIJING – Four years is a long time for anyone, but for an Olympic athlete in the prime of her career, it can feel like an eternity.

After not playing a single minute of a single game in her first Olympic experience in 2018, Alex Cavallini felt a conflict brewing deep down inside.

On one hand, the 30-year-old Delafield, Wis., native was the epitome of class on every step of Team USA’s march toward Olympic gold. She supported her teammates by serving as a sounding board and support network for fellow goaltenders Maddie Rooney and Nicole Hensley, offering advice and counsel whenever she was asked.

Still, you don’t reach the pinnacle of the position without having a competitive fire burning deep within your soul. She had been through all the practices, spent the same amount of time away from friends and family as her teammates and did everything that was asked of her on the road to PyeongChang, South Korea.

Cavallini wanted to play and felt that she deserved to play. The coaching staff didn’t see it that way.

“All three of us are super competitive and I think everyone has to be lying if we didn’t say that we wanted to be the starting goaltender,” Cavallini said during the team’s residency in Blaine, Minn. 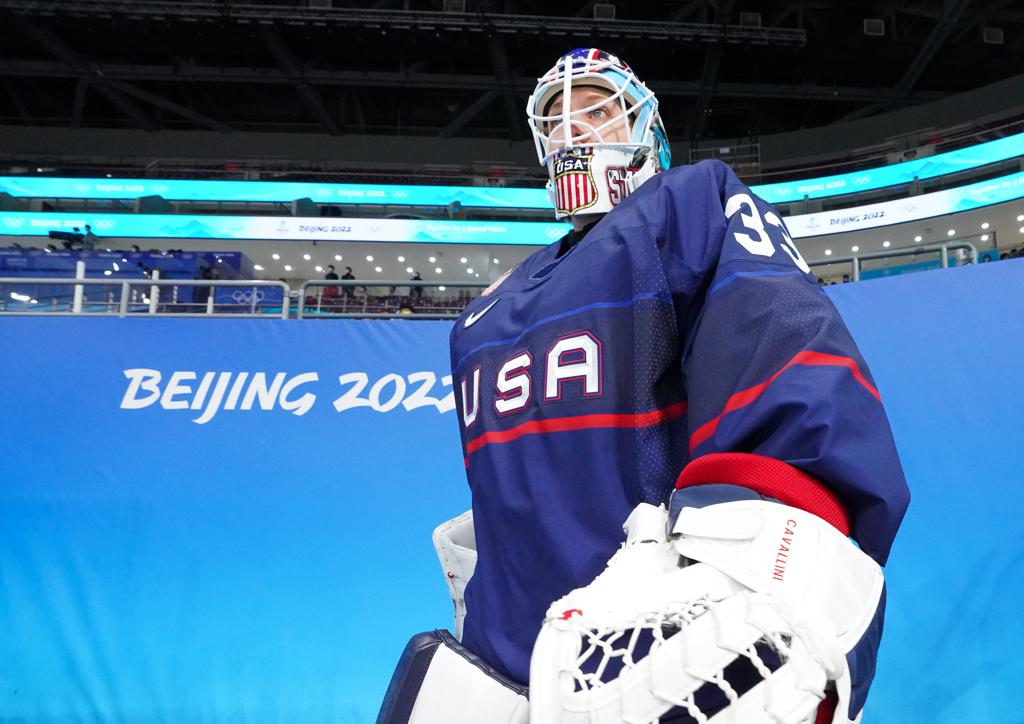 “That’s what is so cool about it is that we are all pushing each other to be our best, but at the end of the day it’s a matter of winning another gold medal.”

As Mark Johnson once said of backup goaltender Steve Janaszak, who didn’t play a minute of the 1980 Olympics, “they only hand out 20 gold medals, and Steve got one of them.”

Cavallini could walk away from the game as an Olympic champion and no one would blame her.

She put away the goalie pads for five and a half months as she sorted things out. Slowly, she began working out again. Eventually she returned to the ice, working with goalie coach Larry Clemens far from the Olympic spotlight in Madison, Wis., where she played four years at the University of Wisconsin.

“I was nervous to get back on the ice just because I wanted to make sure that I was still in love with the game and had fun with the game,” she recalled.

“I’ll never forget that first skate back. I honestly had so much fun. It was kind of one of those things where it was a confirmation that this is what I wanted to continue to do.”

With Rooney and Hensley also returning to the fold, it meant that the U.S. Women’s Team would once again have an abundance of riches when it comes to the goaltender position. But it is also a fact of goalie life that only one of them can play at any given moment.

“You have to be able to see the bigger picture and understand that there is only one person that can play in net at a time,” said the five-time gold medalist at the IIHF Women’s World Championships who set the all-time record with five wins in the 2019 tournament.

“It’s different than a position as a player where they can go out for a shift. There’s no switching out for us.”

Things have been different this time around. U.S. head coach Joel Johnson confers with goalie coach Steve Thompson and the rest of the staff to figure out whose number to call on a nightly basis, and make sure they communicate their plans well in advance of the puck drop.

Based on how well all three have played since they’ve been here at the Olympics, there is no wrong answer when it comes to who to put between the pipes.

“When you get three goalies that have played as well as ours have, it’s a luxury,” Johnson said. “It doesn’t matter their goals against, shutouts, et cetera. We’re looking at it from a perspective of ‘when we need a big save and did we get it?’ And all three goaltenders have provided that.”

So far in this tournament, Nicole Hensley has started one game, a 5-0 shutout of the Russian Olympic Committee, and Maddie Rooney has played twice, against Finland in the opening game and against Canada to close out the preliminary round.

And then there’s Cavallini, who seemed to be at peace after shutting out the Swiss, 5-0 in the preliminary round. If this was to be her only Olympic game, at least she made it a good one.

“I told my family that I’ll believe I’m starting the minute the puck drops and I’m standing in the crease,” she said after her 12-save shutout.

Then came the tap on the shoulder to start the quarterfinal game against Czechia, and again in the semifinal showdown against Finland.

“We’ve got great options,” Johnson has said when pressed on his decisions. “I thought the decision to go with her just felt like this was an opportunity. She’s played well in the past. She’s finally back to being at full strength. And so as a staff, we said, ‘here’s what makes most sense.’”

His hunch was right again as Cavallini stopped 25 shots in a 4-1 win over Finland that set up the gold-medal clash with Canada that everyone has been waiting for.

Having just turned 30, Cavallini won’t say if this will be the end of her competitive career. She has entertained thoughts of getting into broadcasting, and advancing opportunities for girls and women to play is always at the forefront of her mind.

She continues to take it a day at a time and enjoy every opportunity that comes her way. She’s made the most of this Olympic experience, and it’s not over yet.

“I never would have thought as a kid that I’d be still playing at this age,” Cavallini said. “I don’t feel like I’m anywhere near peaking and would love to continue to play, but obviously I don’t want to look too far ahead.”