BEIJING — The U.S. Olympic Women’s Ice Hockey Team earned the silver medal at the 2022 Winter Olympics after a 3-2 loss to Canada in the gold-medal game today at the Wukesong Sports Center.

Hannah Brandt (Vadnais Heights, Minn.) brought both benches to their feet with an early scoring chance just over two minutes into the gold-medal matchup. With a wide-open net, Brandt looked to capitalize on a loose rebound, but her shot hit the post and deflected wide of the goal.

Canada found the back of the net with 12:45 to play in the first, but the goal was called back due to a Canadian skater being offside following Johnson’s coach’s challenge. Just over 30 seconds later, Sarah Nurse gave Canada a 1-0 lead off the faceoff.

With 7:18 remaining in the first, Brandt and Hilary Knight (Sun Valley, Idaho) combined for multiple scoring chances in tight to Canada’s net, but Team Canada maintained a 1-0 advantage. After her appearance in today’s gold-medal game, Knight now owns the record for the most Olympic games played in U.S. women’s hockey history with 22 Olympic appearances.

Marie-Philip Poulin gave Team Canada a two-goal lead with just under five minutes to play in the first period after she snuck the puck under Alex Cavallini’s (Delafield, Wis.) arm stick-side. 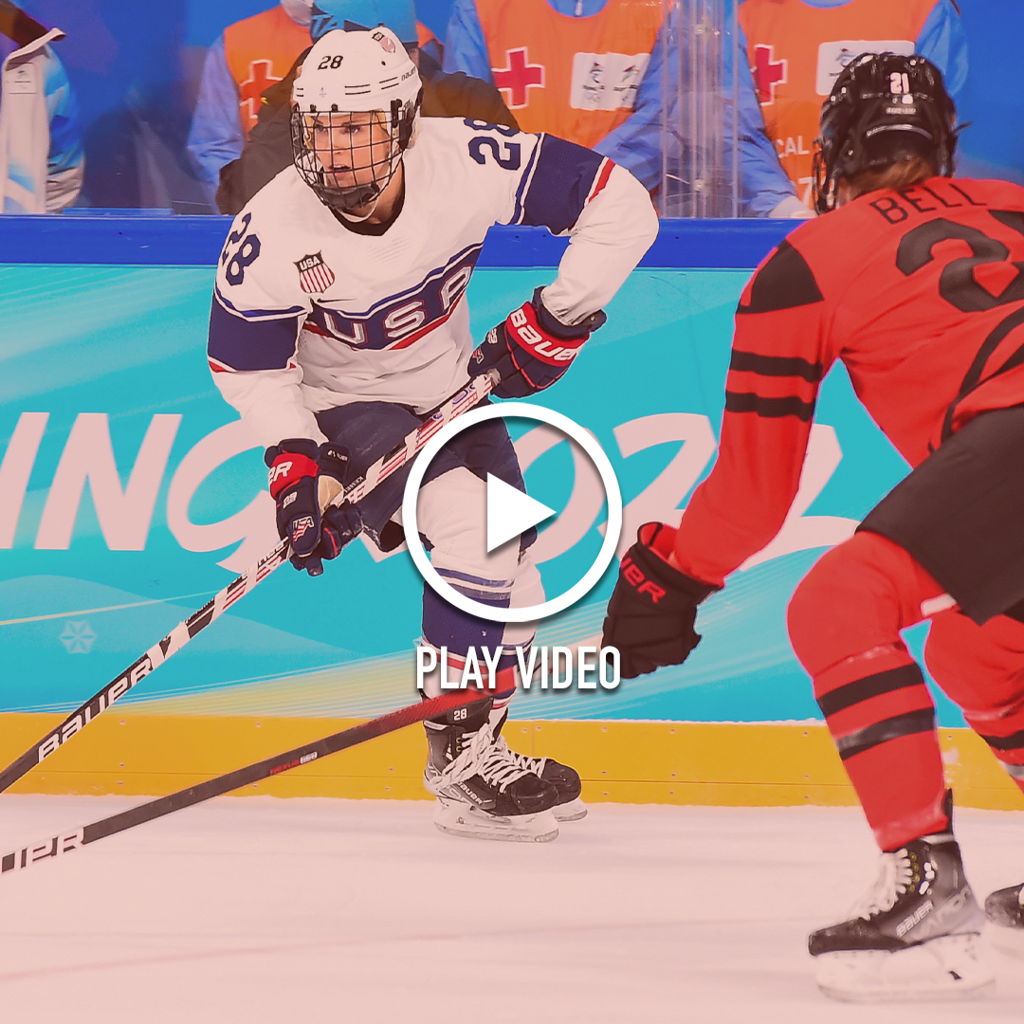 Less than 30 seconds after Canada’s second goal, Team USA took a seat for delay of game, but the U.S. successfully killed off the penalty, preserving the score 2-0 in favor of Canada.

Grace Zumwinkle (Excelsior, Minn.) kept the pressure up until the very end of the first, registering a couple of chances on a wraparound opportunity with just seconds left on the clock.

Coming out of the break, Cavallini made a big stop for Team USA on a fast break for Canada to keep the U.S. within two.

Poulin tallied her second of the game nearing the halfway mark of the second period when she knocked in a rebound on an odd-man rush for Team Canada, making it 3-0 with 10:52 left.

Abby Roque (Sault Ste. Marie, Mich.) looked to put the U.S. on the board minutes later with back-to-back chances in front, but her efforts were foiled by Canadian goaltender Ann-Renee Desbiens.

Kendall Coyne Schofield (Palos Heights, Ill.) and Jesse Compher (Northbrook, Ill.) combined for a couple of Team USA scoring chances with 6:23 to play in the second,  but the score remained 3-0 Canada.

As time ticked down in the second, Knight scored a short-handed goal to put Team USA on the board with 3:21 left in the second. About halfway through a Team Canada power play, Knight and Brandt went tearing into the offensive zone. Knight’s initial shot was blocked by the Canadian defender, but she persevered and found the back of the net on the follow-up.

Alex Carpenter (North Reading, Mass.) saw a promising scoring chance after five minutes had elapsed in the third, but her backhanded chip shot was smothered by Desbiens.

Less than two minutes to go in the game, Cavallini headed to the bench. Team USA took a 6-on-4 advantage with 1:25 to play after Canada took a penalty for tripping.

Amanda Kessel (Madison, Wis.) converted for Team USA with 12.5 seconds left on the clock to cut Canada’s lead in half, making it 3-2 as time expired.