U.S. Women Leave It All On The Ice In Silver-Medal Showing

Players reflect on the tournament and the future of women's hockey

The second-guessing games that come on the heels of any tough loss.

While the U.S. Women’s Olympic Team fought back tears and searched for the right words to articulate the indescribable emotions of the moment, questions arose about just what went wrong or, if you want to be politically correct, what didn’t go according to plan, in the team’s 3-2 loss to Canada in the gold-medal game.

Joel Johnson understands better than most that it comes with the territory. With more than 20 years of experience behind the bench at the collegiate and international levels, he knows coaches get too much credit when their team wins and shoulder most of the burden of blame when things don’t go their way.

And coaching a powerhouse program like the U.S. Women’s Team on the biggest stage in sports, the questions and critiques are part of the job.

“As a coach, you always say shoulda, coulda, woulda in any situation,” Johnson said at the postgame press conference. “Line combinations and ice time are always one of those things that when you win, nobody asks the question. When you don’t win, all of a sudden everybody’s got curious.”

That’s a good thing. It means people care about women’s hockey. And nobody cares more about the game than these 23 athletes and the coaching staff who have given their hearts and souls over the last four years to make this dream a reality. 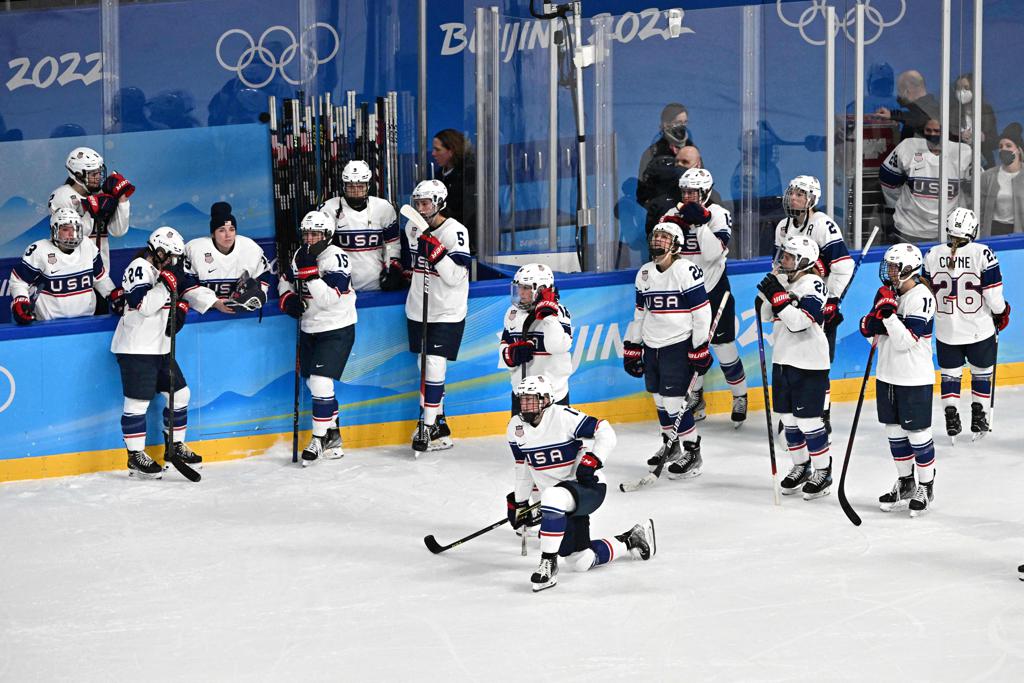 They bear an awesome responsibility of not only carrying the gold-medal hopes of a nation with them on their Olympic journey, but the future of women’s hockey for the next generation. To whom much is given, much will be required. And if that means answering tough questions after a tough loss, so be it.

“The elephant in the room is we can’t get down that many goals and it’s really tough to bounce back,” said Hilary Knight, who left it all on the ice in her fourth Olympic gold-medal game.

“But if anything, focusing on the positives would be the type of character and the fight that we had within that room and the never-die mentality. That’s something that our women took extremely personally and want to put ourselves in a better position to equalize the score and continue on with the game.”

It’s not like the U.S. didn’t have its chances. As long as we’re playing guessing games, one can only wonder how things could have been different if Hannah Brandt’s shot three minutes into the game had been an inch closer to the net instead of bouncing off the outside of the post.

And how big of a difference did Brianna Decker’s injury play in the outcome? In an all-hands-on-deck situation like a gold-medal game, having the ultimate warrior in women’s hockey in the trenches with you is a good feeling.

Decker was hurt 10 minutes into the first game of the tournament and while her presence in the locker room and around the athletes’ village was huge, her absence on the ice was a big loss.

“To lose your top player, who is one of the best players in the world, definitely hurt our team,” said Amanda Kessel. “We did our best to try to come together and I'm proud of our team for sticking together through it all.”

Injuries are a part of the game when you’re playing high-level hockey and the successful teams are the ones who employ the next man up (or in this case the woman) to step in and fill the void.

Questioning a coach’s decision on who to start between the pipes could be an Olympic sport all on its own, and when you’re blessed with three of the best in the game, there is always room for second guessing.

Johnson made the decision to stick with what he felt was the hot hand of Alex Cavallini, and she rewarded his confidence with another excellent performance. And to think that a torn MCL suffered in January made her Olympic plans touch and go right up until she got on the plane, it was downright remarkable what she was able to do.

“I’ve just been really impressed with her work ethic and her performances on the ice,” Johnson said. “To have kind of a little scare in practice about a month before the game started and kind of threw everybody for a loop and she battled back.

“Any goaltender will say they want every goal back, but I was really proud of the way she played.”

These are all questions Johnson will not only ask himself but ones he’ll hear in the coming days and months. He welcomes them because they mean that people care about women’s hockey almost as much as he does.

Sometimes the best answer to these questions is there is no answer at all. Hockey is a funny game. A bounce of the puck here and a post hit there and the conversation shifts with the outcome of the game.

“I don’t know if it’s puck luck or what it is. It just seems like any empty net, any bounce didn’t go our way,” said Kessel, whose goal with 12.7 seconds left showed the fight in this team.

“We maybe got like one bounce all tournament. It just seemed like that was the way that it was going.”

The U.S. women stood tall in answering the questions after the game, knowing they put their best foot forward, not just to help their team win a gold medal, but to showcase their sport in the best light possible.

“There’s a lot of young girls watching back home and I hope women’s hockey cannot be silent after these two weeks,” Kendall Coyne Schofield said as she choked back the tears.