Finding Home Between the Pipes 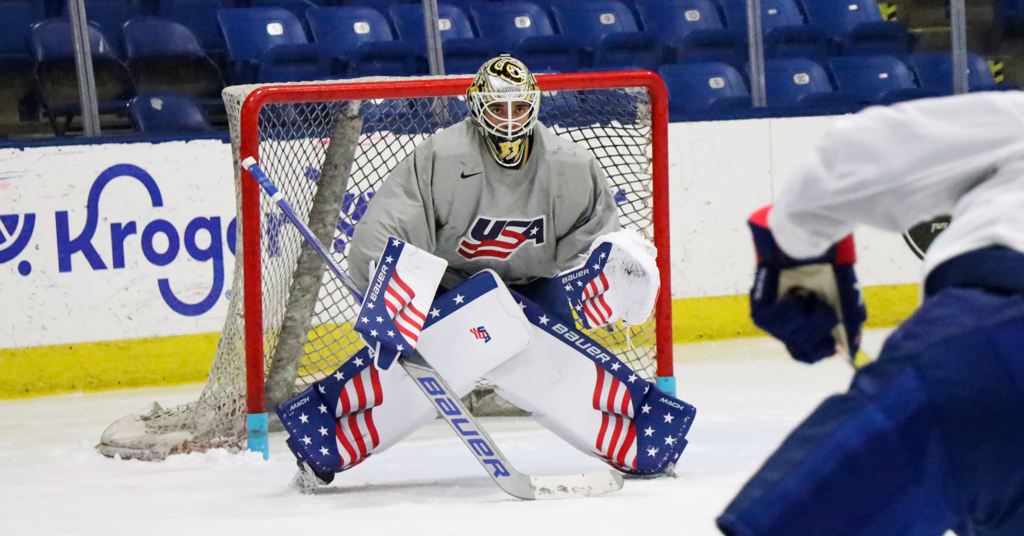 It’s hard to miss the stars and stripes of Kaidan Mbereko’s goalie equipment between the pipes.

The red stripes and navy background dotted by white stars on his pads, blocker and glove seem to fit just right, as the netminder suits up in his second IIHF World Junior Championship with the 2023 U.S. National Junior Team this year.

But Mbereko's hockey career didn’t quite start out that way.

“I started as a player, and it didn’t last very long – it just wasn’t for me,” he smiled. “I didn’t love all the skating and puck handling that comes along with being a player.”

“After about a year, I kind of just stopped with hockey completely,” he added. “But then one of my buddies showed me a pair of pads, and they were Brian’s, ones that you could customize, and that piqued my interest and I wanted to see what playing goalie was about.”

Lucky for him, his parents encouraged him to take that second shot at the sport a few years later.

“I had to get new skates, for sure,” he laughed. “And ever since then, I’ve just loved it.”

The encouragement Mbereko received from his father carried some extra emphasis.

“Ever since I started playing sports, my dad has always helped me understand what it really means to work hard and be a good teammate,” he said. “He’s not a hockey player, but he loves watching hockey, so he likes to draw comparisons in work ethic. Having that support system from him and that knowledge that he brings to the table about what it means to be a good athlete and a good person has always helped.”

Mbereko’s father, Isaac, may not have played hockey, but he certainly knows how to excel at an elite level, having played rugby professionally and representing his native country of Zimbabwe.

“He's given me the advice to be where your feet are at, try and be in the moment as much as you can and enjoy it,” said the netminder. “He would always say to compartmentalize things. When you’re at the rink, you’re at the rink. You’re there to get better and work on your craft, but when you’re at home or with friends and family, you want to enjoy that and the time that you have there.”

Growing up, Mbereko tried his hand at several other sports, including football, rugby, basketball, and lacrosse. And while hockey wasn’t love at first skate, he eventually found his home on the ice between the pipes.

A huge part of that is due to the spark of his friend and the lure of the goalie equipment, but Mbereko also gives much credit to having an older brother who played.

Zak, who is two years older, played for the Oakland Jr. Grizzlies in Michigan, after the family moved from Aspen, Colo. Mbereko followed behind, and eventually played for the Belle Tire, Compuware and Little Caesars programs before joining USA Hockey’s National Team Development Program for 2019-21.

Like every younger sibling, Mbereko wound up in net when he and his brother would play pick-up hockey. Of course, he didn’t mind so much and recalls those moments fondly.

“Growing up I wanted to be just like him,” said Mbereko. “But now, it’s the person he is, how he holds himself, his mentality and how he approaches each day. He’s not playing hockey anymore, but he still motivates me, pushes me every day and always encourages me to be my best. He comes to nearly every one of my games at CC [Colorado College].”

Through the years, hockey has taken the Mberekos to several different states, including Colorado, Washington, and Michigan. It was in Michigan, during Mbereko’s time with USA Hockey’s NTDP, that he realized he could have a future in the sport.

And since first putting on the USA jersey, Mbereko has represented the U.S. on the international stage many times, with this year’s IIHF World Junior Championship marking the sixth time he’s had the honor. 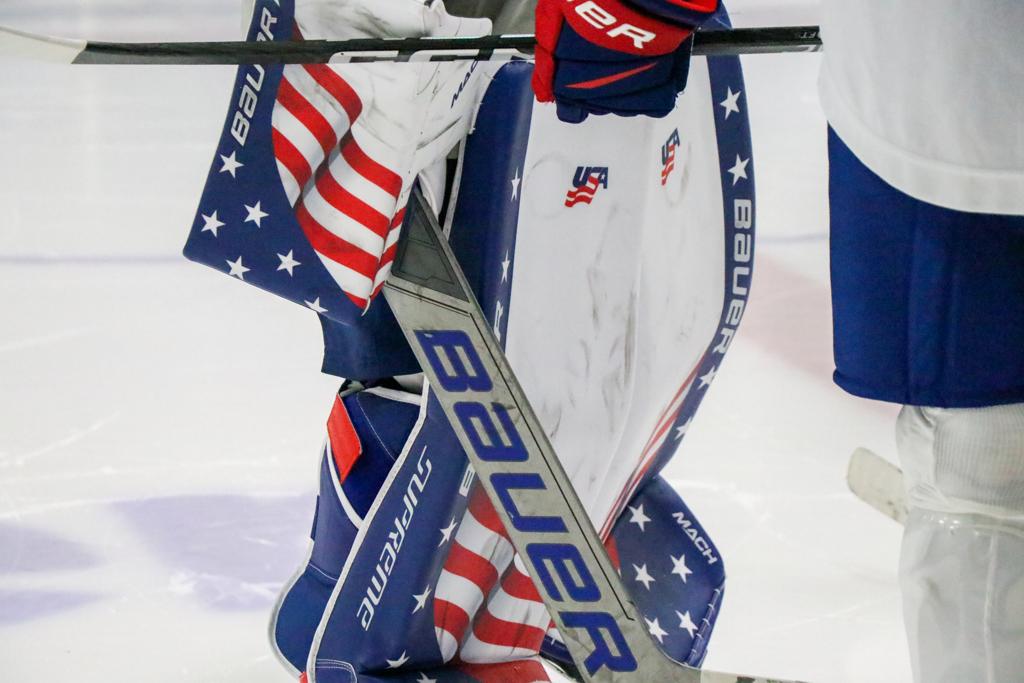 Heading into this year's World Juniors, he boasted a 10-3-0 record in international competition with the red, white and blue.

It’s been an adjustment for the netminder to be in the spotlight, but he’s honored to serve as a role model for fans across the world.

“It’s pretty cool to have those letters [come in] from all around and it just goes to show that everybody’s watching,” he said. “It inspires me to keep doing my best to hopefully inspire other people. Maybe by watching that, they can go try hockey or something else that they want to do.”

He’s even received fan letters from as far as Germany.

“I had no idea until the postcard came to me from Germany – I was like, ‘Wow. I can’t believe people in Germany are paying attention’,” he said. “So it was definitely a special moment. Every time I go on the ice, it’s so much bigger than me and I want to keep that in the back of my head.”

When Mbereko steps out on the ice, he’s certainly representing Team USA, but he knows that he’s also representing his family and the hard work it’s taken to reach the international stage.

“Having the opportunity to represent your family and your country, and thankfully I go to college, so being able to represent that college more than I do myself, and especially my family with the name on the back of the jersey, it just means a lot,” said the netminder, who is in his freshman season with the Colorado College Tigers and was 6-6-1 with a 2.26 goals against average and .927 save percentage with three shutouts heading into the break.

“Just with how far we’ve all come and everything my family has done to help me get to where I’m at right now, it definitely means a lot,” he added. “I want to be playing for them each and every night. My parents have done so much for me to play hockey. I’m super grateful for them.”

His gratitude extends beyond his parents and brother as well.

“I always talk about my mom and my dad, but I can't even put into words how much my grandma and grandpa have done for me and my brother,” said Mbereko. “They haven’t been able to come out to a lot of games, but they watch on TV and have always supported me and my brother. I can’t thank them enough.”

With the visibility of the World Junior Championship, the goaltender will be receiving support not only from his family, but from his country – and maybe even inspiring others to play.

“I think the biggest thing is that hockey or sports or anything is not just for one person, it's for everyone,” he said. “So being my best and doing everything I can to hopefully inspire other people and grow the game is something that means a lot too.”

“Hockey compared to all the other sports isn't as big, so just doing anything and everything I can to positively move the game forward and grow it in the right direction definitely means a lot and hopefully I have more opportunities to do so.”

And maybe a young fan watching will see Mbereko’s pads and try out goalie like he first did many years ago.

“You never know who's watching and who could be paying attention,” he said. “So just making it count each and every day is definitely important.”