For Brianna Decker the Work, and Fun, is Just Starting

U.S. Women's National Team forward Brianna Decker said hard work is the key to her individual and team's success as they continue the long road to the 2014 Sochi Olympic Winter Games in February.

“You’re going to get exposed if you’re not working hard,” said Decker.

The latest stop for Team USA is the Four Nations Cup tournament this week in Lake Placid, N.Y. Click here for more information

Yet this is no grind for Decker, the former standout at the University of Wisconsin. All the long practices, the drills, the travel and the Bring on the World Tour to get ready for the Games are making her feel as if she’s a kid with a three-month pass to Disney World.

“Oh my God it’s so fun,” said Decker. “It’s been the experience that I’d hoped it was going to be. And I’ve been enjoying every minute.”

Decker, after all, is living her dream.

Almost since she first laced up skates and picked up a hockey stick as a little girl in Wisconsin, Decker has hoped to play in the Olympic Winter Games. Now, with her brilliant college career behind her, she can concentrate fully on that quest.

“Taking a break from school and being able to focus on something I’ve had a passion for and loved all my life, and to be able to share it with 24 other girls who have the exact same focus and passion, it’s an unbelievable experience,” she said.

Decker, 22, made her name in college as a scorer, and she’s brought that talent to the U.S. team, which will be pared down from 25 to the final 21 in December.

The 5-foot-4 center was the leading U.S. scorer at this year’s International Ice Hockey Federation Women’s World Championship, scoring six goals and adding two assists to help her team win the gold medal. Over 10 games on the U.S. team in the 2012 and 2011 World Championships, Decker showed what she could add to the cause by scoring eight goals with 13 assists.

In two Olympic-prep games against Canada this fall (both U.S. losses), Decker has scored twice. It’s no secret she’s one of Team USA’s best options on offense, just as she was at Wisconsin. For the Badgers, she was a three-time All-American, won the Patty Kazmaier Memorial Award as the nation’s best player her junior year and finished her career with 115 goals, which ranks seventh all-time in major women's college hockey.

As her coach at Wisconsin, Mark Johnson, once noted, Decker’s offensive ability is truly special.

“She can score,” Johnson said. “She’s strong and she protects the puck really well. If she goes into a corner and has the puck, she’s tenacious. That’s tough to play against.”

On the U.S. team, of course, scoring isn’t the only road to a gold medal. For the U.S. to get past defending Olympic champion Canada and the rest of the elite teams in the field, it’s going to have to play defense, and Decker says she’s totally committed to that.

As a sophomore at Wisconsin, Decker decided to concentrate more on the defensive side of her game, and she knows she must always continue to focus on it.

“I play center, so I don’t have a choice,” she said. “I have to play and help the defense out a lot, and so I focus on it. … Everything starts with D-zone and you have to work your way up.”

Decker said it’s certainly not hard to be inspired to work to improve every aspect of her game because of the example of all the veterans on the U.S. team, such as Julie Chu, Meghan Duggan and Kacey Bellamy.

The way they work on the ice and carry themselves off it, says Decker, makes her want to work even harder, and their positive attitudes are infectious.

“They’ve been to the Olympics, they have a lot of experience behind them and they made the transition for me coming onto the team very easy,” Decker said. “They’ve made me realize what to expect every game when you’re wearing the U.S. uniform.” 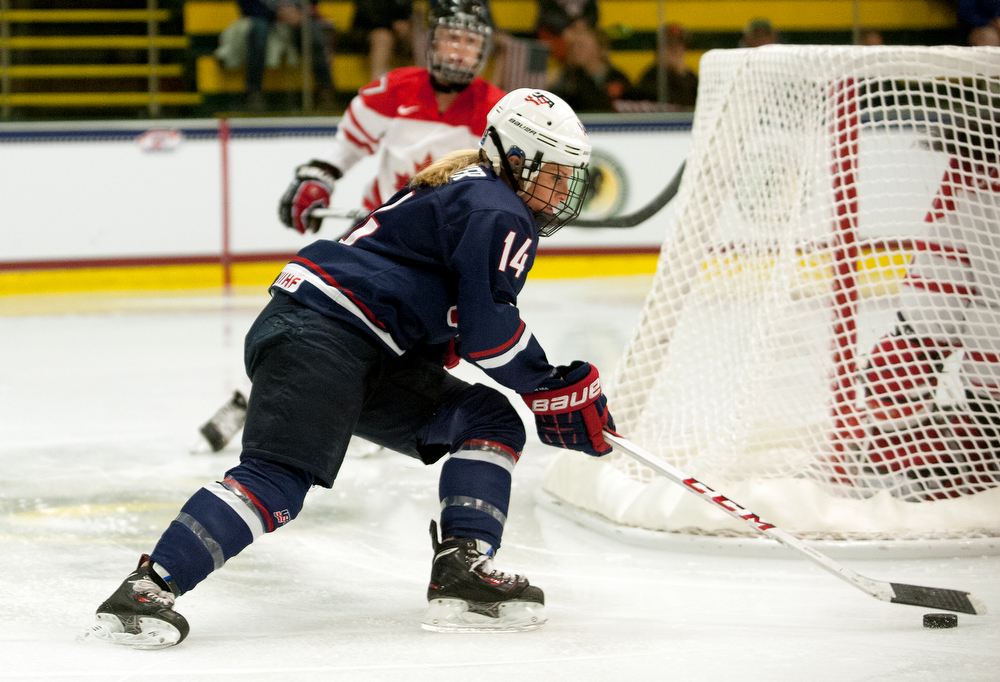