Vetter Steady As Ever During Hectic Second Period

LAKE PLACID, N.Y. - When the U.S. Women's National Team found itself in a flurry of Canadian pressure in the second period of Wednesday's 4-2 loss to Canada, it turned to goaltender Jessie Vetter to weather the storm.

The veteran goaltender made several impressive saves in the period to keep her team trailing by just one goal entering the third period. Head coach Katey Stone said Vetter's performance on several odd-man rushes was something both necessary and expected.

"She makes the saves she needs to and makes a few that keep us in the game when we're a little less disciplined than we need to be," Stone said. "She's steady, we know what we're going to get there."

"If you let a goal in, then in the back of your mind you are like 'OK, just don't let another one in' and to give your team an opportunity to win and that's what I was trying to do," Vetter said. "Overall we had a chance to win at the end and we had a good game."

Lyndsey Fry would tie the game before late penalty trouble contributed to the loss. The winning goal was scored on a 5-on-3 Canadian power play and the final margin was reached with an empty net goal.

Vetter, who starred at the University of Wisconsin, finished with 24 saves and her voice could be heard at ice level shouting encouragement and direction to her teammates from the blue paint.

"As a goaltender you have the best view of the ice and (you try to) just give your defense a little more time to react on the ice.," she said. "It's something I've been working on. The D appreciate it and so I'm going to keep doing it." 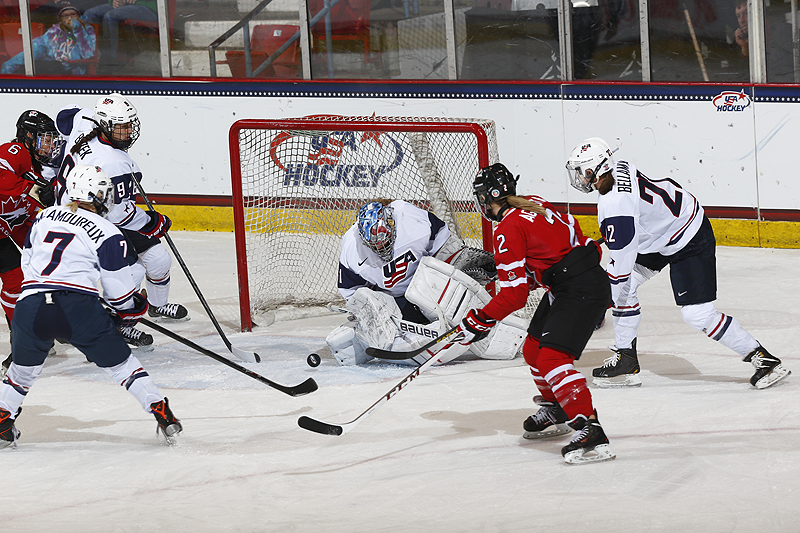