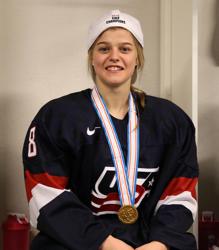 It’s been a whirlwind year for Emily Pfalzer.

The 22-year-old Getzville, N.Y., native opened the year finishing out her senior season at Boston College and later made the U.S. Women’s National Team for the first time.

On Sunday, Pfalzer fulfilled another lifelong dream when she made her professional hockey debut as the Buffalo Beauts of the new National Women’s Hockey League opened the season against the Boston Pride.

“As a little girl, I always dreamed of playing in the Olympics and playing in the NHL,” Pfalzer said. “There wasn’t a professional women’s league to strive for, and now it’s amazing to see little girls and even older ones just being able to have a dream and wanting to play in this new league.”

It’s a perfect situation for Pfalzer, who lives about 15 minutes from the rink and is able to live out her dream of playing professional hockey in her hometown.

“It’s an amazing feeling just to be back home,” Pfalzer said. “Buffalo is my favorite place, and there’s no place like home. It’s amazing for our town, and it really couldn’t be more perfect for me.”

As the league emerged and caught her attention, she was intrigued that there were teams not only in New York, Boston and Connecticut but also her hometown of Buffalo.

“When I saw there was a team in Buffalo, that was a big eye-opener for me,” Pfalzer said. “I think I was kind of in awe because of all places they can have a team, I wasn’t thinking Buffalo would be one of them. It’s an incredible feeling to be able to play here and my family and friends and everybody can come to the games.

“It really worked out to being at home and somewhere with people I’m familiar with. Everything just fell into place.”

It also works out for her parents, who don’t have to travel seven hours to watch their daughter play hockey. Pfalzer also benefits, living back home with her parents, just minutes from the rink, after spending the previous four years in Boston.

“I’m taking it year-by-year; I don’t know what I’ll do next year,” Pfalzer said. “Everything is happening so quickly, I thought the right move was to stay at home. It’s definitely different being away and coming back to live with my parents.

“It’s great though, just having family dinners, going to family events and being around my whole family. It’s something I didn’t have at Boston College and something you definitely take for granted when you’re away.”

Pfalzer certainly made her mark at Boston College, finishing as the best offensive defenseman in program history. She ended her career ranked first in school history with 102 points and 79 assists. Off the ice, she was the Boston College female Scholar-Athlete of the Year her freshman, sophomore and junior seasons. Pfalzer was a pre-med and biology major at Boston College, graduating with a degree in biology.

“When I was little, I wanted to play hockey and I wanted to be a doctor,” Pfalzer said. “It’s really competitive to get into medical school, and being at college it was hard to build a résumé.

For now, she’s excited to continue her distinguished hockey career. Last season, Pfalzer was a first-team All-American and was named Hockey East Best Defenseman for the second straight year. She also made history as the only Boston College defenseman to eclipse 100 career points.

“Through the four years at Boston College, it’s not something I look back on or think about,” Pfalzer said. “I look back on winning the Beanpot and the regular season and things like that.

“It’s such an honor, I really owe a lot of the success to my teammates. I feel honored to have played with such great players who helped me become a better player.”

She continued to grow and learn earlier this year as part of the U.S. Women’s National Team that captured the gold medal during the International Ice Hockey Federation Women’s World Championship in Sweden.

It wasn’t the first time Pfalzer donned the Team USA sweater, as she previously was a member of the U.S. Women’s National Under-18 Team and the Women’s Under-22 Select group. But last year was her first two events with the senior national team.

“Winning the gold medal was something I’ll never forget,” Pfalzer said. “Making the team was a dream come true. It’s always an honor and a privilege to wear the USA jersey.

“It was an amazing experience, and I learned a lot from the older girls mentally and physically on and off the ice.”

Pfalzer will have the opportunity to compete in her second Four Nations Cup this November in Sweden. As she continues to emerge as a valuable player for Team USA, she now wants more.

“I want to work as hard as I can and be the best player I can for the team,” Pfalzer said. “I want to work my hardest to be able to make every team I can.

A New Approach to Goaltender Development

On a mission to make every coach a goalie coach

Players in youth hockey should get equal playing time regardless of the situation.