Fast-forward to 2016, and that core group of under-18 girls from 2011 are trying to help the U.S. to another world championship, making up eight of the 15 U18 alumnae currently competing for Team USA at the 2016 IIHF Women’s World Championship in Kamloops, British Columbia.

“2011, it seems like a long time ago now,” said Shiann Darkangelo, former member of the U.S. Women’s National Under-18 Team and current U.S. Women’s National Team player. “For me, it’s way different now being here with the national team. The U18 tournament sets you up, just having to go to pre-camp before and learning how the older players get things done, so to speak.”

The U18 program began in 2008, 18 years after the IIHF hosted the inaugural Women’s World Championship. Since that time, the U.S. has brought home five gold medals, and has never finished worse than silver.

Arguably one of biggest payoffs of the U18 program is that is provides USA Hockey a platform to evaluate players on an international stage at a young age and continue to develop them — as the high alum count demonstrates.

“In addition to helping improve on-ice skills and competing internationally, the U18 program has proven to be a great opportunity for players that age to enhance their mental skills, nutrition and off-ice training during the early stage of their development,” said Reagan Carey, director of women’s hockey at USA Hockey.

“It’s a platform to help players learn good habits in several areas that directly translate to their success at that stage and build upon for when they advance to future opportunities within Team USA. In recent years we’ve also incorporated national team veterans like Meghan Duggan and Kacey Bellamy to serve as player ambassadors and that has resonated significantly with the younger players as well.”

For the 15 players who have come through the U18 Worlds route, they had an early opportunity to represent the U.S. on a large stage and learn everything that comes with that honor.

Michelle Picard, who played at the 2010 and 2011 U18 Worlds, said putting on the red, white and blue sweater for the first time and hearing a crowd chant “U-S-A” is a memory she’ll always have.

The U.S. fell to Canada in overtime in 2010 to take home a silver medal before earning gold the following year. For Picard, the experience of both devastating losses and prestigious wins as a young player helped develop her confidence. She has taken that with her to Harvard University and the 2014 Olympic Winter Games and everything in between, including Kamloops for her fourth Women’s World Championship.

“Winning a gold medal and hearing the national anthem after we won the game, it’s a feeling that you don’t forget, and I’ve wanted to have it over and over again,” Picard said.

From a skill standpoint, the U18 players get to not only compete against some of the best players in the world in that age range, but also against older, stronger national team members.

Leading up to the 2011 U18 Worlds, Darkangelo recalls scrimmaging national team members at a USA Hockey women’s camp in August. At the time, Meghan Duggan and Hilary Knight were older players at a higher skill level than the high school and junior competition the U18 girls were used to.

Now, at the 2016 Women’s World Championship, those older players are now fellow teammates.

Additionally, 14 of the U18 alumnae have at least one teammate from U18 Worlds with them on the current national team roster. 2010 and 2011 boast the most current players with eight from each year.

Not only does that familiarity help build chemistry and a sense of comfort on the ice, but it helps with team bonding off the ice.

“U18s was a while ago, so we’ve gone through college and we’ve grown up quite a bit the past few years,” Picard said. “But still, they’re familiar faces. You know a little bit about each other and it helps build stronger relationships and better chemistry, and that helps on the ice as well.” 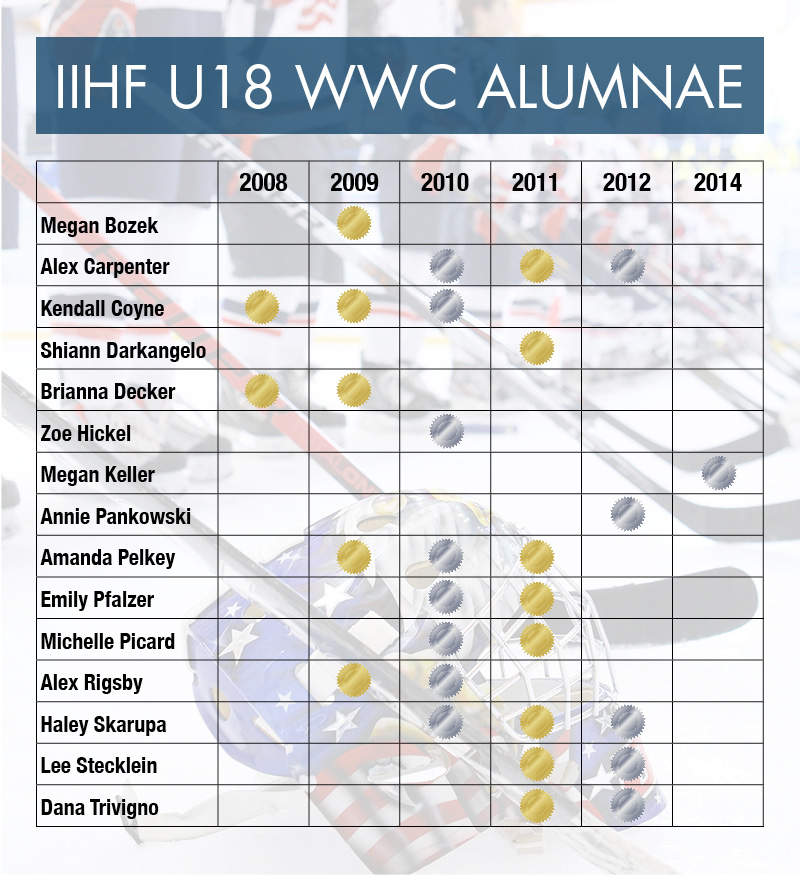 After winning gold medal with Team USA, Cambridge native looks ahead to Harvard