“We are excited for Maura to lead the charge and are confident that our U18 team will benefit from the expertise of this uniquely qualified coaching staff in the coming season,” said Reagan Carey, director of women’s hockey at USA Hockey.

Crowell will also serve on the staff at the upcoming Under-18 Girls Select Player Development Camp June 23-29 in Biddeford, Maine, as well as during the 2018 USA Hockey Women's National Festival Aug. 6-13 in Lake Placid, New York. 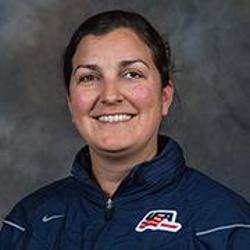 Crowell is serving as head coach of the U.S. Under-18 Women's National Team for the first time in her career, after having served as associate coach in 2017-18 and assistant coach in 2015-16. In both previous seasons, Team USA has taken home gold medals from the IIHF Under-18 Women's World Championship. Crowell has additional experience with USA Hockey, having also coached at a pair of USA Hockey Women's National Festivals, and during the 2017 and 2015 Under-18 Series against Canada.

"It's such an honor to have been called to lead this year's under-18 women," said Crowell. "I'm continually impressed with the level of talent and focus in each of these young players, and I'm excited to have the opportunity to help this year's group reach its full potential."

ABOUT SCIBA
Sciba will be serving as assistant coach for the U.S. Under-18 Women's National Team for the first time. He has been a coach annually at USA Hockey Under-18 Girls Player Development Camps for the past 10 years, and recently served as a coach during the 2017 USA Hockey Women's National Festival in Lake Placid, New York. Sciba is currently the head coach of the Union College women's hockey team, a position he has held since 2016. Under his guidance, the Dutchwoman hockey program has shown steady growth. He was named a top-three finalist for the ECAC Coach of the Year in 2017-18. Prior to joining the Union staff, Sciba served as an assistant women's hockey coach at Colgate University from 2012-2016. In his final season with the Raiders, Sciba helped the team to a program-best 22 wins. He also spent four years on the Niagara University women's hockey coaching staff, including three seasons as an assistant coach and one campaign as head coach. Sciba is a 2007 graduate of the University of Notre Dame where he spent four seasons (2003-07) as a member of the Fighting Irish men's hockey program.

ABOUT DECKER
Decker will be making her debut as a member of the coaching staff for the U.S. Under-18 Women's National Team, having recently helped the 2018 U.S. Olympic Women's Ice Hockey Team to a gold medal at the PyeongChang Olympic Winter Games in February. Decker has previous coaching experience with USA Hockey having served as a coach at various Central District camps since 2012 and during USA Hockey Girls Under-18 Select Player Development Camps. Additionally, Decker has served as an assistant coach with the Madison Capitals and at various other camps since graduating from the University of Wisconsin in 2014. A two-time Olympian (2018-gold, 2014-silver), five-time International Ice Hockey Federation Women's World Championship gold medalist (2013-17, 2011) and two-time Bob Allen Women's Player of the Year Award recipient (2017, 2015), Decker will focus on player mentoring and development as coach while remaining an active player in the USA Hockey women's program.

NOTES: Approximately 30 players will be invited to the USA Hockey Women's National Festival Aug. 6-13, in Lake Placid, New York. The camp will culminate with the selection of a 22-player roster that will represent the U.S. in a three-game series against Canada from Aug. 14-19 in Calgary, Alberta ... The IIHF Under-18 Women's World Championship is scheduled to be played for the 12th time and will include teams from Canada, the Czech Republic, Finland, Japan, Russia, Sweden, Switzerland and the United States. The dates and location of the tournament will be announced in the near future. Team USA, the four-time reigning world champion, captured gold in each of the first two years of the tournament (2008, 2009) and again in 2011, 2015, 2016, 2017 and 2018. The team has taken home the silver medal in 2010, 2012, 2013 and 2014 ... Reagan Carey (Colorado Springs, Colo.), USA Hockey's director of women's hockey, is the general manager of the 2018-19 U.S. Under-18 Women's National Team.