Twenty years ago, the U.S. Olympic Women’s Ice Hockey Team stole the hearts of the nation as it captured the gold medal in the 1998 Olympic Winter Games.

Over the years, the 20 players along with their coaches have had plenty of reunions and time to recollect their memories of the storybook run in the Games. But two decades had passed without the players stepping on the ice together. That was until Sept. 22.

The Olympians were invited to play in the 18th annual Stirling Cup, a fundraiser for Aspen Junior Hockey. Eight of the players from the ’98 squad teamed up with seven more U.S. alumnae to take on the University of Colorado women’s club team at Lewis Ice Arena in Aspen, Colorado.

“We’re all older and out of shape and we’re just trying to keep up with the young ones,” joked Shelley Looney, who scored the game-winning goal for the U.S. in the 1998 gold-medal game vs. Canada. “It was fun. It was interesting to hear the girls from Colorado talking to us afterward about how amazing it was to have this experience to play with us, against us.”

Some of the players for Colorado weren’t even born when the U.S. women shocked the hockey world in Nagano. Some of the college athletes called it a dream game for them to play against the Olympians. 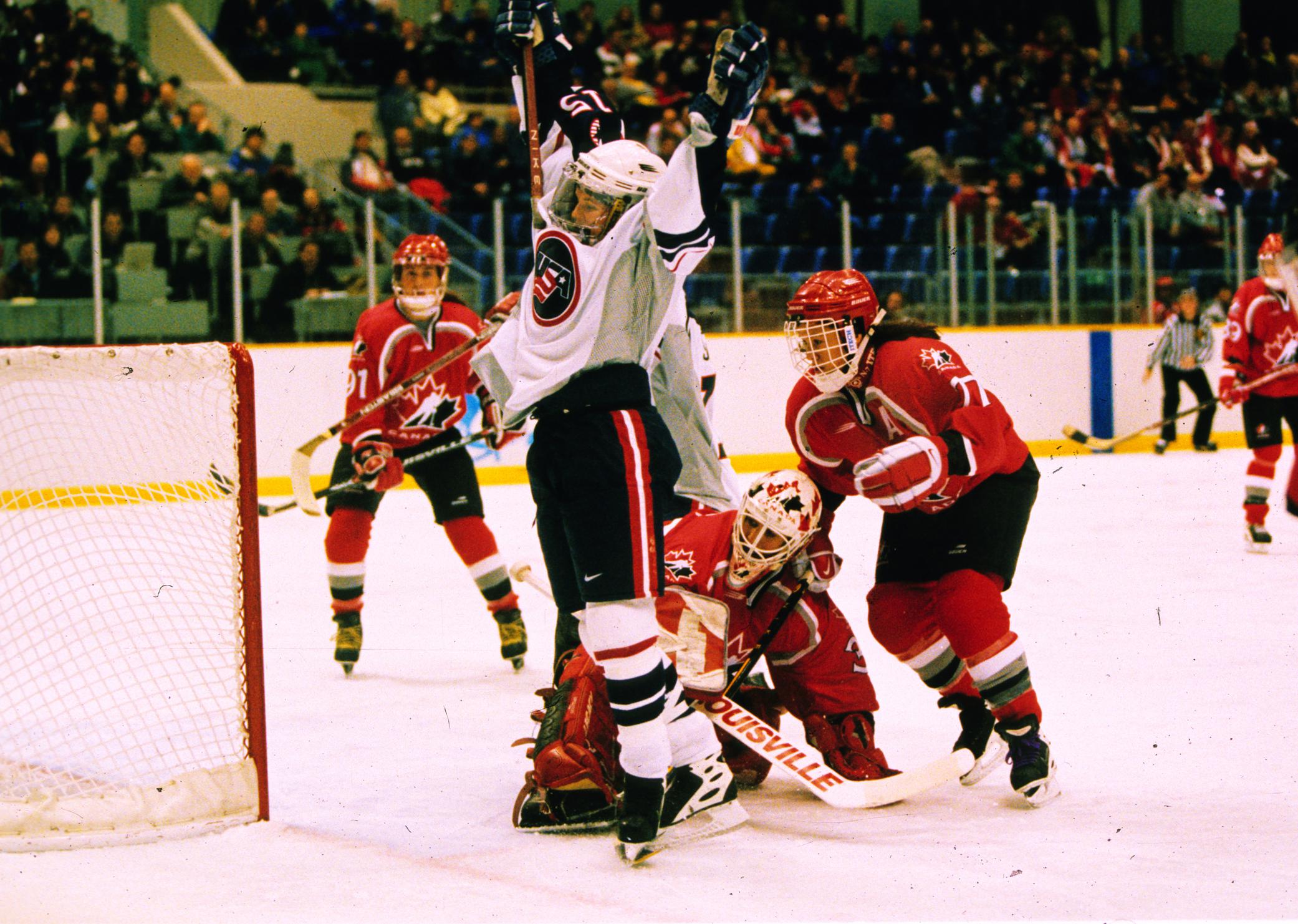 “They were overwhelmed, pretty emotional,” said Shaun Hathaway, event organizer and Aspen Junior Hockey executive director. “This was the highlight of their career. The ’98 team is essentially what put girls hockey on the map... They were absolutely thrilled and it was really special.”

The Stirling Cup usually features former National Hockey League alumni, so it was extra special for the ’98 Olympians to compete. The game, which had 400-500 fans packed into the rink, raises money to cover a scholarship program to allow any child in Aspen to get into the sport.

“Man, it was a great event,” Hathaway said. “It was a home run. It was a great hockey game, very evenly matched. It was better than any of the NHL alumni games we’ve ever had.” 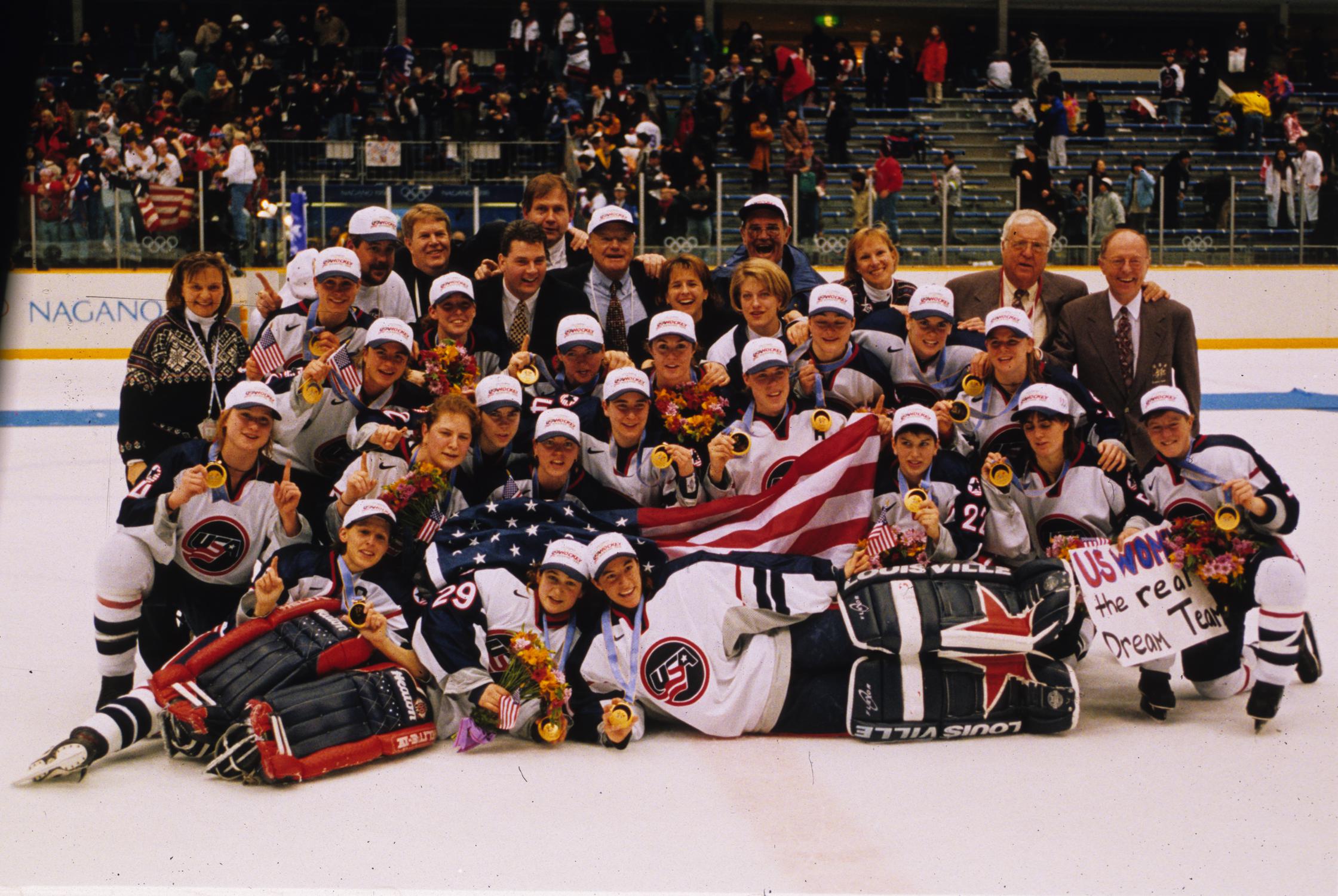 Along with the game on Saturday night, there was a golf outing the next day at the Aspen Golf Club. That provided plenty of time for the ’98 players to get reacquainted and also mingle with spectators. The Olympians brought their gold medals to the events to show to the fans.

“I think every time we have a chance to share our medals, all 20 of us do it,” Looney said. “Yes, we won them, but we have them for everybody else to have that opportunity.”

“The ’98 girls were phenomenal. They were true ambassadors of the game,” continued Hathaway.

Getting back on the ice stirred up many great memories for the women from the ‘98 team.

“Not just on the ice, but just hanging around each other for the whole weekend,” Looney said. “We got to share a lot of memories. It was interesting to see the people that were around us listening to us about certain events that have happened and us laughing about them. They didn’t say much until later on. They’re like, ‘It’s amazing to hear these stories from you personally.’”

Since 20 years has gone by, some of the memories aren’t as crisp as they once were. But fear not, the stories are just as good — or even better.

“We were joking because some people remember things that others don’t or [they recall things] differently,” Looney said. “We were sharing stories with each other and even though I might have been there, I don’t remember it or I don’t recall it the way they do, so it’s nice to hear another perspective.”

Since the event was such a success for the fans and everyone involved, the players from the ‘98 team were extended an invitation to play in next year’s event.

“We’ve never committed to what we’re going to do this early,” Hathaway said. “For us, it was no-brainer. We’ll bring them back and we’ll see what we do next year.”

Hathaway said the Stirling Cup keeps getting better every year and organizers keep coming up with fresh ideas. They are talking about bringing in 36 Olympic hockey players and holding a draft a night before the game. That could be quite the scene.

The players from the ’98 team are already looking forward to next year’s event. They will have some unfinished business to take care of as the University of Colorado scored a 7-4 victory in this year’s game.

“It was funny because we knew it was for charity, but when you’ve been at that level of competitiveness it always comes out no matter what,” said Looney, who coached two of the Colorado players in the 2016 World University Games and will coach the U.S. team again this year. “I think it would have been a little different if we would have had five or six of the other girls from our team [playing]. I don’t think we’d mind a rematch for sure.”