Detroit Red Wings forward Dylan Larkin just turned 23 years old, but he’s already in his fifth season in the National Hockey League. Through his team’s first 10 games, the forward has collected seven points, and part of his rise in the NHL has included gaining experience as a leader on the U.S. Men’s National Team at the IIHF Men’s World Championship.

“I think the experiences with Team USA have helped me grow as a player and as a leader in the dressing room because we usually have young guys and I try to find myself as a leader of the young core at USA Hockey,” Larkin said. “I know all of the guys from past experiences with the [USA Hockey National Team Development Program], World Juniors, playing in the World Championship with other guys and just being around a lot of the rinks and being friendly with all of the guys.”

For three straight years, Larkin has had a familiar face behind the U.S. bench – Jeff Blashill, who is also Larkin’s head coach in Detroit. For both Larkin and Blashill, those experiences have been influential in Larkin’s development, which they discussed in an interview for NHL.com approaching the 2019 IIHF Men’s World Championship.

“Every year, I’ve taken away something different, whether it’s confidence or learning to play a different role or the experience of playing with different players,” said Larkin. “I think it really sets me up for a great summer of training.”

His head coach echoes just that.

“Every time you represent your country in a tournament where the best players in the world go and play and it’s a three-week tournament,” Larkin said, “you play a lot of games in a short amount of time. You grow as a player and a person, and for me, I think I’ve really grown in all roles of my game, playing in big minutes and being a leader on and off the ice. It’s always a great experience going over and growing not only as a player, but as a person.”

One of Larkin’s biggest honors came in 2017 as he was first named as an alternate captain at the World Championship in Cologne, Germany. He has since gone on to wear the “A” in 2018 and 2019 as well. In 2018, Larkin netted three goals and nine points in 10 games and helped the United States to a bronze medal at the tournament in Copenhagen and Herning, Denmark.

Larkin also earned a bronze medal the first time he represented the United States in the World Championships in 2015 in Ostrava and Prague, Czech Republic.

“Winning bronze medals in 2015 and 2018 was really special,” Larkin said. “In 2015, it was my first year and it was a great learning experience. The one in 2018 meant a lot because we had a great group of guys. It was in Denmark and we played a really good tournament with guys like Patrick Kane and Anders Lee.” 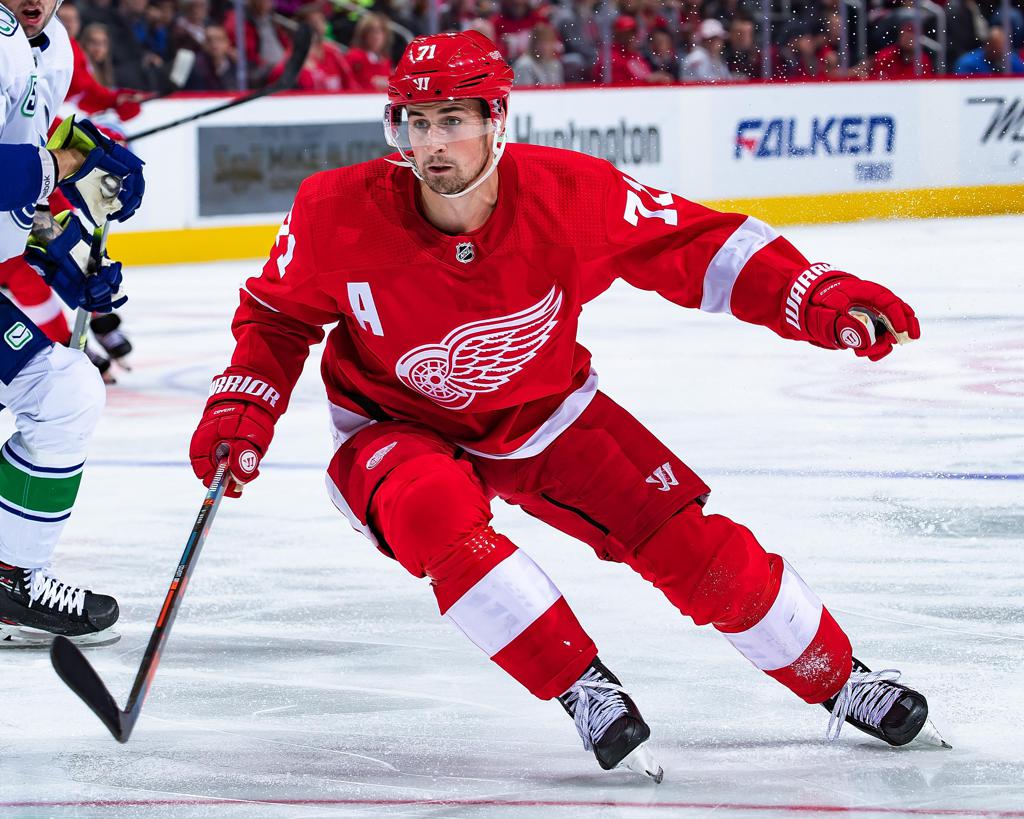 The 2018 bronze medal was also special to Larkin because it happened several months after the passing of Jim Johannson, the longtime assistant executive director of USA Hockey and the general manager of the 2018 U.S. Olympic men’s team.

Larkin, while playing at the 2018 World Championship, helped develop the idea for a charity hockey game that featured NHL stars and paid tribute to Johannson at the USA Hockey Arena in Plymouth, Michigan.

“Speaking with [Johannson], recruiting us for the world championships meant a lot … that we always would show up and represent our country,” Larkin said. “Just through conversations with him, I think he’s given me great opportunities to play for my country, and I’ll always want to play because of people like that in USA Hockey.”

Larkin, who helped the U.S. earn a gold medal in the 2014 Under-18 World Championship, is one of eight U.S. players to have earned more than one medal in IIHF Men’s World Championship play. He ranks first all-time with 22 assists and is tied for sixth with 29 points in world championship action.

And at 23, he’s taken on more of a leadership role among those representing the U.S. in the Men’s World Championship.

“It means a lot to be a captain for your country,” Larkin said. “Everyone gets along, but I think being a leader is easier because you have guys who are captains from other teams, so you just follow them, do the right things and really just bond with the guys and get to know them. It’s easy to carry that over and back to our locker room here in Detroit as experience.”