Team USA closes out preliminary round play against Canada Tuesday

“This was one of those games where before the game our whole coaching staff looked at each other and said 'I think we are ready to go,'” said Joel Johnson, head coach of the 2022 U.S. Olympic Women’s Hockey Team. “It had nothing to do with the opponent. It had everything to do with us. We just felt we were really ready to play well and we certainly did that. We generated a lot of offense, kept a lot of puck possession and, more importantly, created some really good scoring chances that were tough to defend.”

Less than five minutes into the game, Alex Cavallini (Delafield, Wis.) made a big stop for the U.S. off a 2-on-1 for Switzerland to keep the game scoreless at the start. Kendall Coyne Schofield (Palos Heights, Ill.) answered with a chance for the U.S., but it was gloved down by Swiss goaltender Saskia Maurer. 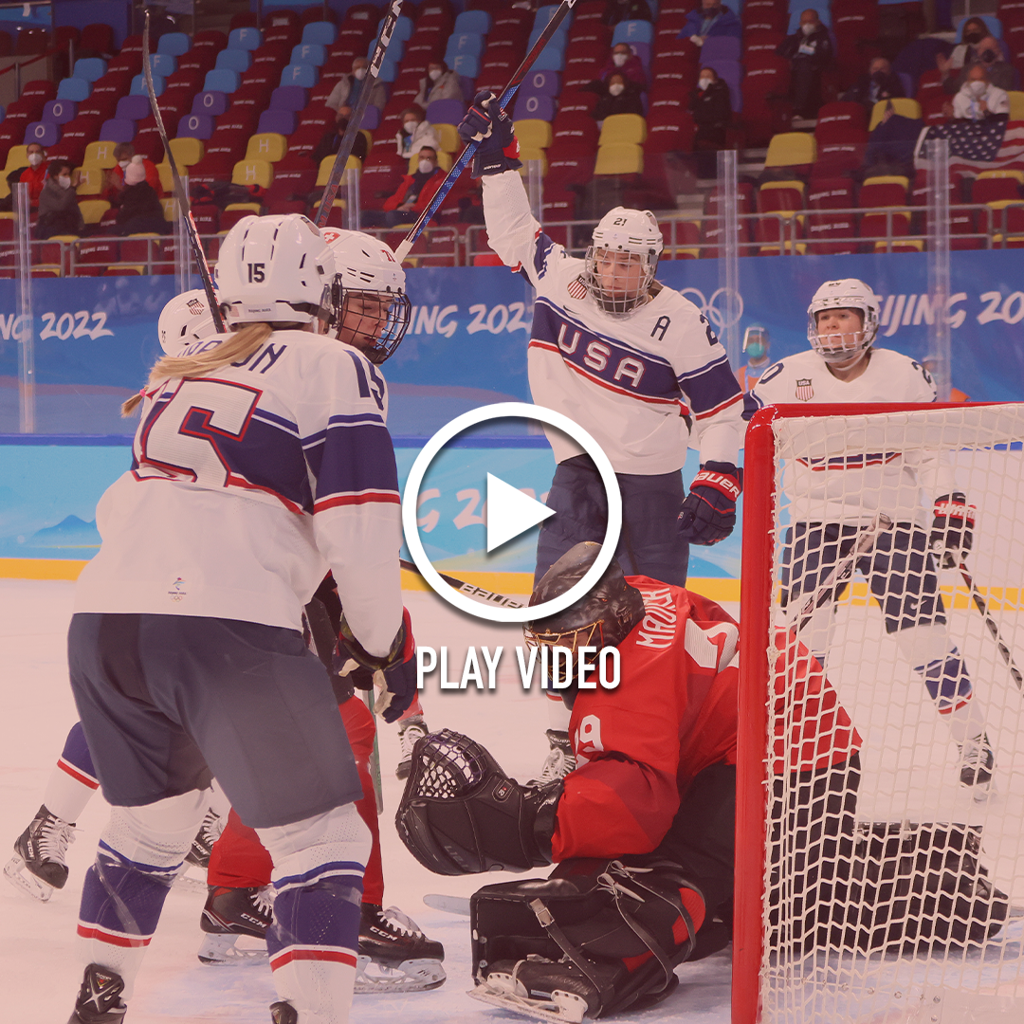 The U.S. saw an early opportunity for the lead on the power play. Alex Carpenter (North Reading, Mass.) passed the puck down to Amanda Kessel (Madison, Wis.) at the goal line, who flicked it over to Abby Roque (Sault Ste. Marie, Mich.) for the shot to no avail.

Hilary Knight (Sun Valley, Idaho) kept the pressure and moments later capitalized on the power play to give the U.S. a 1-0 lead with 14:20 on the clock in the first. Knight scooped up her own rebound in front and tucked it under the cross bar for the first goal of the game.

Team USA scored two goals in nine seconds to jump out to a 3-0 lead over Switzerland with over five minutes to play in the first period.

The first came from Compher, who scored her first career Olympic goal last game against the Russian Olympic Committee. Off a pass from Hayley Scamurra (Getzville, N.Y.), Compher landed a wicked one-timer right in the slot, extending Team USA’s lead to 2-0 with 5:56 to play in the first. Megan Bozek (Buffalo Grove, Ill.) took credit for the secondary assist on the play.

Nine seconds later, Knight scored her second of the game after she found the top corner from the near face-off dot, giving the U.S. a 3-0 lead.

The U.S. went on to add two more goals in the first period. Two minutes after Knight’s second goal of the game, Pannek snuck one under Maurer’s glove for her first career Olympic goal. Dani Cameranesi (Plymouth, Minn.) and Cayla Barnes (Eastvale, Calif.) picked up assists on Pannek’s goal.

Kessel rounded out the scoring in the first period when she scored off another sleek one-timer from below the face-off circle with 22 seconds on the clock, giving the U.S. a 5-0 lead heading into the break.

With a new goaltender in net for Switzerland, Pannek scored her second of the game just over two minutes into the second period, putting the score at 6-0 in favor of Team USA.

Cavallini was faced with another 2-on-1 from Switzerland as the game approached the halfway mark, but Cavallini made another pivotal save to hold Switzerland scoreless. Both teams saw power play opportunities in the back half of the second period, but neither were able to find the back of the net.

Compher scored her second of the game with just over two minutes to go in the middle frame. Compher curled around the face-off dot and found the top corner with a wrist shot high in the the slot, giving the U.S. a dominant 7-0 lead after two. Bozek and Jincy Dunne (O’Fallon, Mo.) each registered their second assists of the day on Compher’s second goal.

Knight and Pannek both had the chance to complete the hat trick early in the third period, but both chances were foiled by Swiss net minder Andrea Braendli, who replaced Maurer at the start of the second.

Abbey Murphy (Evergreen Park, Ill.) kept the offensive pressure on until the very end, recording three shots on goal with just over three minutes to play in the third, but the score remained 7-0.

The first goal of the third period came 17:29 into the frame when Cameranesi tapped the puck in through Braendli’s five-hole to secure the final 8-0 with 2:31 to play in the game.

The U.S. outshot Switzerland 66-12 overall and Cavallini finished with 12 saves to earn the shutout against Switzerland.