Goaltender registered first shutout by a U.S. goaltender at the Olympics since 2010

BEIJING – Drew Commesso may have felt like a wide-eyed teenager coming into his first Olympic experience, but he played like a seasoned international veteran.

The youngest American goaltender to ever start an Olympic hockey game lived up to the moment by stopping 29 shots in an 8-0 U.S. victory against China on Thursday night.

Needing little more than Brendan Brisson’s first period power-play goal, Commesso stood up to the challenge against a host team that is relying heavily on foreign players to maintain a level of respectability in this tournament.

“I didn’t really have any nerves,” the 19-year-old said. “I just tried to do what I do in every game. My job is the same, whether I’m at the Olympics or playing summer hockey. It’s the same puck and the same sheet of ice, it’s just on a bigger stage.”

Tonight’s victory marked the first shutout by a U.S. goaltender since Ryan Miller blanked the Swiss in the 2010 quarterfinals, and the first in an Olympic opener since Mike Richter in 2002. To be mentioned in such elite company is more than Commesso could wrap his head around. 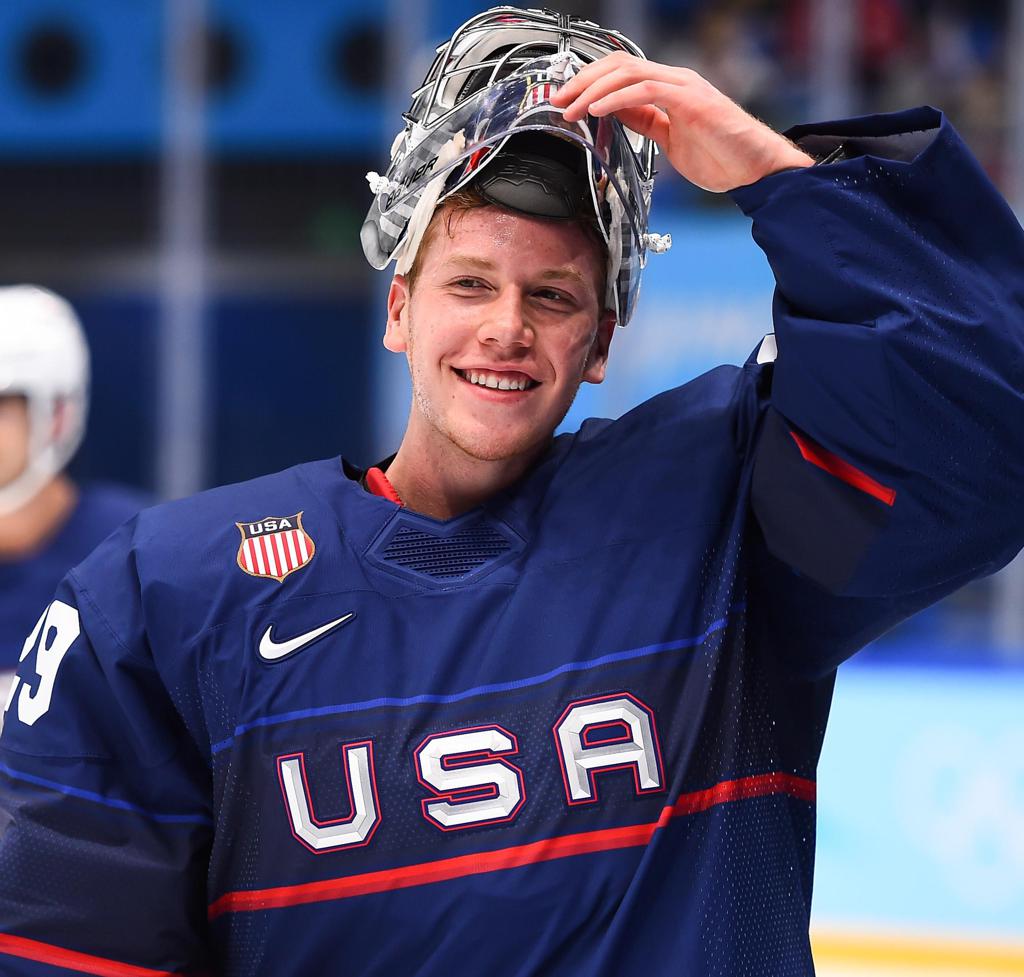 Drew Commesso prepares to make his Olympic debut as the youngest netminder ever to play on a U.S. Olympic Men's Hockey Team.

“It’s a huge honor to be mentioned in the same company with names like that. It’s kind of surreal,” he said. “I’m just so grateful that I’m so blessed to be able to be in a position like this on a stage like the Olympics.”

Commesso proved he was the right choice after drawing the start over two more experienced goalies, Straus Mann, the former University of Michigan netminder who now plays in Sweden, and Pat Nagle, of the AHL’s Lehigh Valley Phantoms, who is 15 years older than the Boston University sophomore.

Playing in his first game since beating Providence College on Jan. 30, Commesso made several stops early to get into the flow of the game.

“He made some tough saves,” said U.S. head coach David Quinn. “They did a great job getting to the net. They’re big bodies, and they got puck in the net quickly. So he had to fight his way through traffic and I thought he did a really good job of that. ”

With his teammates controlling the play for much of the game, Commesso was rarely tested but came up big when called upon, especially late in the game making a toe save on a low shot off the stick of former Terrier Brandon Yip.

“I knew him a little bit from playing at BU and he was kind enough to reach out to me when I made the team say congratulations,” said Commesso, one of 36 BU players to suit up for Team USA in the Olympics.

“I gave him a little tap on the pads just to say hello. He seems like a really great guy, and it’s great to have some Terriers on the ice.”

Commesso developed a love of the game playing knee hockey with his dad in the living room of their Norwell, Mass., home. He made the transition to the ice, first as a forward and he later found his calling between the pipes with the Bay State Breakers.

One of his biggest rivals growing up was Matty Beniers, who lived five minutes down the road. The two would clash a number of times over the years before joining forces at USA Hockey’s National Team Development Program and again at the 2022 IIHF World Junior Championship.

When that tournament was cancelled after three days due to a rising number of positive Covid results, Commesso and his teammates were devastated.

But then U.S. general manager John Vanbiesbrouck pulled him aside along with his Beniers, Brock Faber and Jake Sanderson and softened the blow with an invitation to play in the Olympics.

“Having that tournament get canceled, really stung and it really hurt because I’ve been looking forward to that for so long,” said Commesso, who was in net against Slovakia in the only U.S. game in the tournament.

With their first game behind them, that challenge will ratchet up on Saturday when the U.S. takes on Canada in the second game of the preliminary round. The winner will have the inside track to the top spot in Group A, which brings with it an automatic berth in the quarterfinals. The other teams will have to survive a qualification game to advance to the round of eight.

The two teams met in a controlled scrimmage on Monday, where both Commesso and Mann were solid in splitting time in net.

“I thought that was a really good building block for myself and our team,” Commesso said. “Just to have a little taste of the competitiveness of this tournament, is there’s something that’s going to really help my game and help our team.”

Since arriving here on Feb. 3, he has been trying to soak in as much of the Olympic vibe as he can, while also bonding with his teammates away from the rink.

As a member of the U.S. delegation he was excited to march in the opening ceremony and meet a number of athletes from other sports.

“I’ve really been enjoying every second of it here,” he said. “You kind of forget you’re here for hockey when you’re seeing all these amazing athletes and going to the opening ceremonies. It’s really a true life experience and I’m trying to do the best to soak all that in.”

As a second round draft pick of the Chicago Blackhawks, Commesso was especially excited to meet Kendall Coyne Schofield, who serves as a player development coach with the NHL club.

“I got to meet her out here at the village. I’m obviously a big fan of her and have been watching her play this tournament,” he said. “Hopefully I can get a signed stick or something because she’s a legend in women’s hockey.”

If Commesso continues to play like he did in the opener, there will be plenty of people who will be asking for his autograph.