"We look forward to having Robb continue leading our team at the world championship,” said Reagan Carey, director of women’s hockey at USA Hockey. "We have a strong coaching staff overall and I know everyone is excited about the challenge ahead, particularly the chance to defend our gold medal on home ice."

The tournament marks the fifth time Stauber has been on the coaching staff for Team USA at the world championship and the first time as head coach at this event.

"I'm excited to have this opportunity and continue what we've all been working toward with a talented group of players," said Stauber. "It's a great honor to represent USA Hockey in this capacity and defend our gold medal from the past few years." 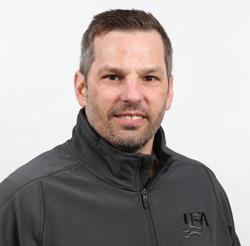 Stauber previously served as head coach of Team USA for a pair of games against Canada in December 2016, including the Team USA Winter Champions Series contest played at USA Hockey Arena. He also served in that capacity for the 2016 USA Hockey Winter Camp from December 12-16, 2016, and the National Team Training Camp from February 28-March 2, 2017.

A native of Medina, Minn., Stauber played 10 years of professional hockey, including four seasons in the NHL with the Los Angeles Kings and Buffalo Sabres. He also spent time in the IHL and AHL.

At the University of Minnesota, he was the first goaltender to win the Hobey Baker Award (1988). He was also the recipient that year of the WCHA Player of the Year award and was named All-WCHA First Team and All-America First Team. Additionally, Stauber was recognized as WCHA Goaltender of the Year in 1988 and 1989. He represented the U.S. at the 1987 IIHF World Junior Championship and 1989 IIHF Men's World Championship.

Stauber served as the goalie coach for the University of Minnesota men’s hockey team from 2000-2008, helping the team win national championships in 2002 and 2003. He served in the same capacity for the University of Minnesota Duluth’s women’s hockey team from 2004-08, during which time the Bulldogs earned a national title in 2008.

Strot is serving on the Team USA coaching staff for the eighth time at the 2017 IIHF Women’s World Championship. It is his third time on the staff for the IIHF Women’s World Championship after helping guide the team to gold medals in 2015 and 2016. He also served as an assistant coach for the U.S. Women's National Team for a two-game series vs. Canada in December 2016 as well as for the U.S. Women’s Under-22 Select Team at the Under-22 Series vs. Canada in 2014, 2015 and 2016. A native of Maple Grove, Minnesota, Strot is the founder and president of Hockey International and is currently the head coach of the USPHL Tampa Bay Junior (Elite and USP3HL) teams. Prior to coaching junior hockey, Strot was an assistant coach for the Jacksonville Barracudas of the Southern Professional Hockey League (SPHL). Strot played eight consecutive years (1990-98) of professional hockey in four different leagues (CoHL, ECHL, IHL, WCHL) before returning to play parts of three seasons (2002-04, 2005-06) with the Jacksonville Barracudas (SPHL, WHA2 and ACHL). He also played collegiately at the University of Minnesota (WCHA) from 1986-90.

The 2017 International Ice Hockey Federation Women’s World Championship is the second time Mara is serving as an assistant coach with the U.S. Women's National Team. He served in the same capacity for the U.S. Women's National Team for a two-game series vs. Canada in December 2016. Mara is a former NHL defenseman and bronze-medalist with Team USA at the 2004 IIHF Men’s World Championship. He played 734 NHL games and accumulated 253 points (64-189) with six different franchises, including the Tampa Bay Lightning (1998-2001), Phoenix Coyotes (2001-06), Boston Bruins (2006-07), New York Rangers (2007-09), Anaheim Ducks (2010-11) and Montreal Canadiens (2009-10, 2011). His best season came in 2005-06 with the Coyotes, in which Mara led all Phoenix defensemen with a career-high 47 points (15-32). On the international stage, the Belmont, Massachusetts, native competed in three consecutive IIHF World Junior Championships (1997-99) with Team USA, totaling seven points (2-5) in 19 games. He also notched one goal and two assists in nine games while helping the U.S. earn a bronze medal at the 2004 IIHF Men’s World Championship.

The 2017 International Ice Hockey Federation Women’s World Championship marks the seventh time that Tamer is representing Team USA as an assistant coach. It is the second time he is on the staff for the IIHF Women’s World Championship after helping coach the team to a gold medal in 2016. He also served twice as an assistant coach for the U.S. Women’s National Team at the 2015 and 2016 Four Nations Cup and for the 2016 Team USA Winter Champions Series. He was also on the staff for the U.S. Women’s Under-22 Select Team at the Under-22 Series vs. Canada in 2015 and 2016. Tamer played in the NHL for 11 seasons (1993-2004) as a member of the Pittsburgh Penguins (1993-1998), New York Rangers (1999) and Atlanta Thrashers (1999-2004). The veteran defenseman appeared in 644 career games, registering 21 goals and 64 assists for 85 points. He also played collegiately at the University of Michigan (CCHA) from 1989-1993. A native of Dexter, Michigan, Tamer represented Team USA twice in the IIHF Men's World Championship (1999, 2002). He currently owns and operates Crossfit Brighton in Michigan.

The 2017 IIHF Women’s World Championship is the first time Richter is serving as a goaltending coach with the U.S. Women's National Team. A 2008 U.S. Hockey Hall of Fame inductee and 2002 Olympic silver medalist, Richter played 666 career games during his 14-year NHL career with the New York Rangers. The Abington, Pennsylvania, native was selected as the MVP of the 1994 NHL All-Star Game and went on to break the Rangers’ single-season record with 42 wins en route to leading the team to the President’s Trophy and first Stanley Cup title since 1942. Richter participated in three Olympic Winter Games (1988, 1998, 2002) and led Team USA to the inaugural World Cup of Hockey championship in 1996 where he was named the tournament’s MVP.  He also played in two IIHF World Junior Championships (1985-86), three IIHF Men's World Championships (1986-87, 1993) and the 1991 Canada Cup. Richter played two seasons of college hockey (1985-87) at the University of Wisconsin before beginning his professional career.