The Robertson family had season tickets to the Los Angeles Kings. As young kids, Jason, Nick and oldest brother, Michael, dressed up like hockey players to attend the games, complete with helmets and mini sticks.

During intermissions they could be found, “Screwing around in the concourse playing hockey,” Jason said. “Eventually my dad said, ‘You know what? Let’s try these guys out.’”

The brothers started skating with coaches in Burbank and eventually got into more organized hockey to improve their games. The California natives eventually moved to Michigan in 2010, which opened up even more hockey opportunities for the family.

It all eventually led to left wingers Jason and Nick being selected in the NHL Draft and eventually making the U.S. National Junior Team roster. Jason won a silver medal with Team USA in 2019, while Nick made his National Junior Team debut in 2020 as the youngest player on the U.S. roster. He is eligible to return for the 2021 IIHF World Junior Championship. 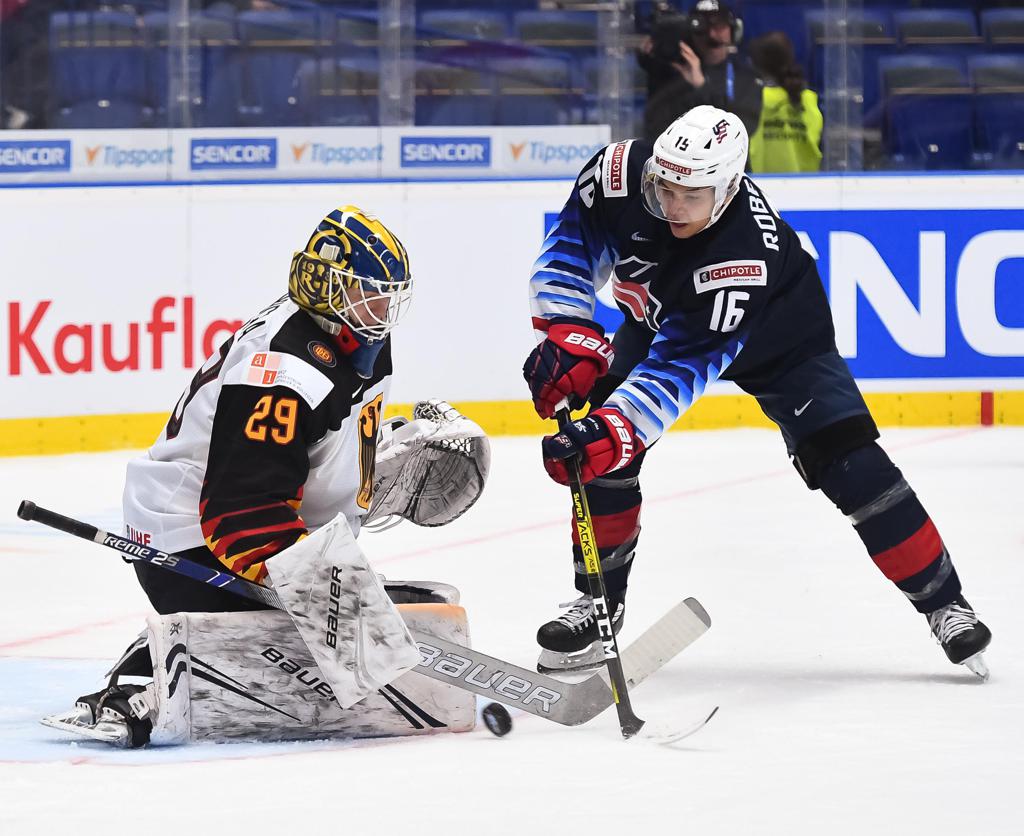 Nick Robertson with a scoring chance against Germany at the 2020 IIHF World Junior Championship.

The Dallas Stars drafted Jason 39th overall in 2017. He made his NHL debut in February 2020 after spending the majority of the season playing for the Texas Stars in the American Hockey League. Nick went 53rd overall to the Toronto Maple Leafs in the 2019 NHL draft. Leafs GM Kyle Dubas named him to the club’s expanded playoff roster for the NHL’s return-to-play plan take place to close out the 2020 season.

Jason and Nick’s mother, Mercedes, was born in Manila, Philippines, and moved to California as a young child. Hugh, their father, hails from Michigan and was a fan of the Chicago Blackhawks and Detroit Red Wings before settling in L.A., according to Nick.

Being in California, the brothers made the journey to the rinks after school in an RV to bring each kid to a practices at different rinks, according to Nick. The amount of travel was a factor in the move to Michigan, where the rink was a mere 10 minutes away.

The brothers also engaged in “typical hockey stuff” at home, too, Nick said.

Ever since Jason and Nick were preteens, they wanted to play in the NHL, and their dad helped push them to improve and work on their skills, Jason said. He recalled their dad getting up at 6 a.m. to take the boys to nearby Farmington Hills in Michigan for them to skate.

Jason, who stands at 6-foot-3, skated four seasons with Kingston before being traded to Niagara in his final junior season. He racked up 149 goals and 317 points in 252 OHL games. Nick, 5-foot-9, spent his last three seasons with the Peterborough Petes, scoring 97 goals and 77 assists across 162 games. He shattered his career-highs in his final season, scoring 55 goals and 86 points in 46 games.

They played against each other eight times throughout their junior careers.

“We’d steal the puck from each other and say some quick words right as the play is going,” Jason said. “We always kept that competitive edge. We always wanted to push each other.”

As the younger brother, Nick describes the hockey bond with Jason by saying “it’s kind of like a practice test before the main test.” Whatever Jason does right or wrong when it comes to hockey, the older brother can pass the intel — and setting the competitive bar in the stats categories — to Nick.

“So, it’s really beneficial for me,” Nick said. “Him being two years older definitely helps me, sets an example. I think he’s just a reliable piece of my success.” 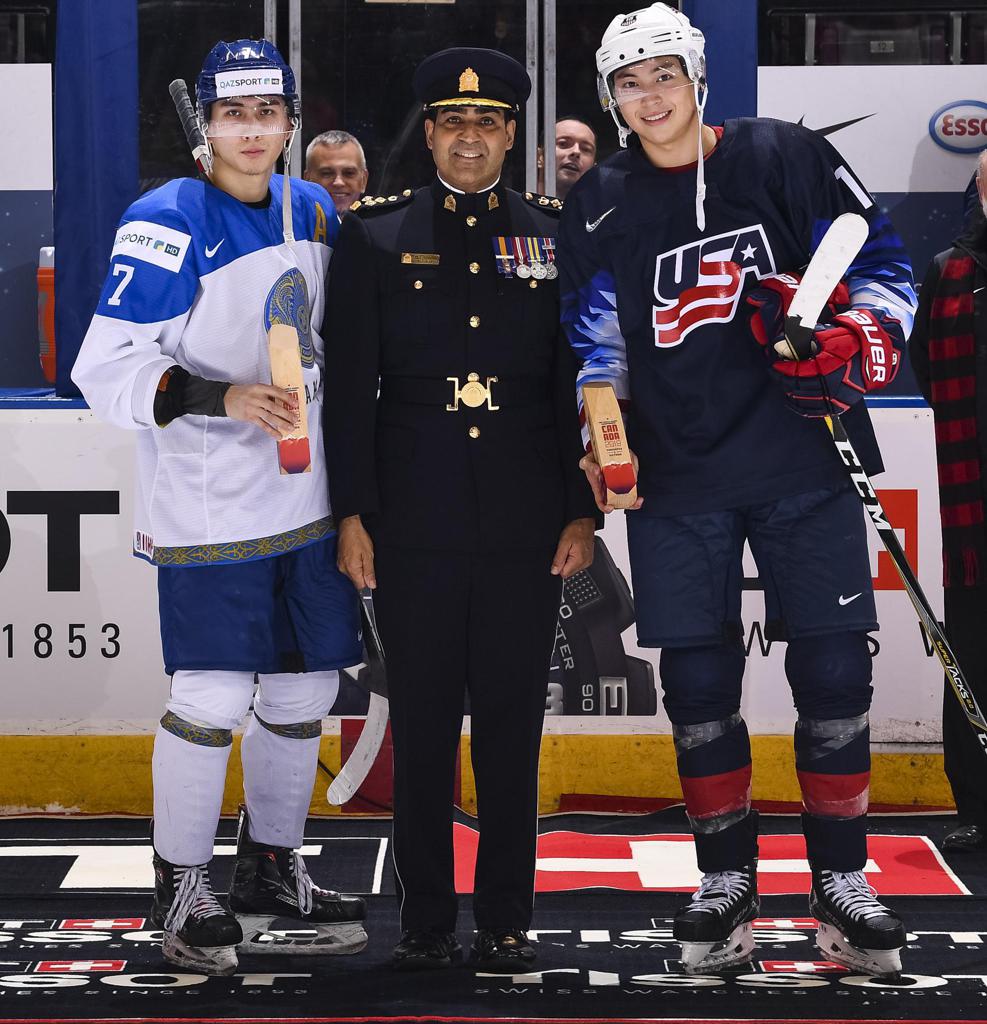 Jason Robertson is presented with the player of the game awards following a 8-2 U.S. win during preliminary round action at the 2019 IIHF World Junior Championship.

Jason was called up from the AHL and scored an assist on a Tyler Seguin goal in his NHL debut Feb. 13, 2020 in Toronto, a 3-2 Stars victory.

“You see the NHL on TV, but you never know until you actually play against it,” Jason said. “I felt very comfortable and was fortunate to get my first point.

“That was an emotional moment for my parents and all my billets that helped me get to where I wanted to be.”

It worked out well for their parents, who were already in Toronto and were able to witness the debut live. Jason played two more NHL games and finished the 2019-20 AHL season with 25 goals and 47 points in 60 games.

Jason has stood out in the 2020-21 season, surpassing the 40-point mark in a shortened NHL season.

The brothers credit their parents for instilling a hard-work mentality. It’s about staying focused, not getting distracted and sticking to a routine, Nick said. He has already seen the heavy Filipino population in Toronto and hopes to set an example there with the Maple Leafs. He said he’s motivated to be that example for not only Filipino kids, but also California kids who haven’t always had the luxury of having an ice sheet a few minutes away to play hockey.

Jason didn’t think much about being a Filipino-American hockey player until he was drafted. It’s something he and his brother take pride in. Jason skated with some Filipino players in Toronto last summer, so he’s tried to work with them, too.

“My mom always promoted the Filipino culture, which is hard-working and all about family,” Jason said. “We want to keep that very close to us and always promote those two things. If we can do that playing hockey, we’ll be able to do that.”

Jason and Nick want to make an impact for their respective NHL squads. The brothers trained at home together daily during the shut down because of the COVID-19 pandemic.

They’re also hopeful to face each other in the NHL, something that would mean a lot to their parents, Jason said.

“I think that experience for them would be super emotional and very heartwarming to see their kids eventually play against each other in the NHL,” Jason said. “It’s what we’ve wanted to do our whole lives, to see that dream come true.”