“It is extremely hard to find words to describe my career,” said Bellamy. “Being able to represent my country for the past 15 years has been such a privilege. Before every game, I would look at the USA crest before putting the jersey on. It was a moment to remind myself that I represent my country, family, UNH, Berkshire, and hometown. I am beyond honored to have met so many incredible people along the way; teammates, coaches, support staff, fans, and opponents. The respect and competitive nature that hockey brings out in people make for an unbelievable culture to be a part of. I am forever grateful for the lessons learned, memories made, and relationships built.

“I want to thank my family for all the sacrifices they made for me to reach my dream. My parents are my rocks, and I wouldn’t be the person I am today without them. My siblings have become my biggest fans who don’t just support me, but they support women’s hockey as a whole.

“Lastly, I want to thank my teammates. I was able to compete at the highest level with my best friends. We worked towards the same goal, pushing each other every day and smiling while doing it. I wish those current players all the best, and I will be cheering you on over the next nine months and beyond! Keep taking pictures because 20 years from now, you’ll cherish them.”

“We’ve had the good fortune to watch Kacey excel on the international stage for the last 15 years and help lead our team to nothing but success,” said Pat Kelleher, executive director of USA Hockey. “While we’ll miss seeing her on the ice, we look forward to her continued involvement in hockey, and wish her nothing but the best in the future.”

“Kacey’s leadership, focus and competitive energy will be greatly missed,” added Katie Million, director of women’s national team programs for USA Hockey. “She redefined the expectations of what it means to give your all for Team USA. Thank you, Kacey, for consistently putting your heart and soul into this program. We’ll continue to cheer you on as you embark on your next chapter.”

Bellamy’s career with the U.S. Women’s National Team began after finishing her freshman campaign at the University of New Hampshire during the 2005-06 season. She was selected as a member of Team USA for the 2006 Four Nations Cup. Bellamy played in all four games, tallied one assist and helped the U.S. to a second-place finish. The blueliner went on to play in 13 other Four Nations Cups, helping the U.S. to titles on seven occasions.

Bellamy made her Olympic debut at the Winter Games in Vancouver, British Columbia, in 2010 where the U.S. captured silver. She was also a member of the 2014 team in Sochi, Russia, where the U.S. also gained silver, before serving as an alternate captain of the 2018 gold-medal team in PyeongChang.

In total, Bellamy played in 130 games for the U.S. Women’s National Team from 2006-2021 with 49 points, including 11 goals and 38 assists. In the U.S. record books, she ranks first all-time among blueliners in games played, fourth in assists and tied for fourth in points.

She is one of just two players ever part of the U.S. Women’s National Team to have won eight world championships and is among only 13 players to have competed on three or more U.S. Olympic Women’s Ice Hockey Teams. 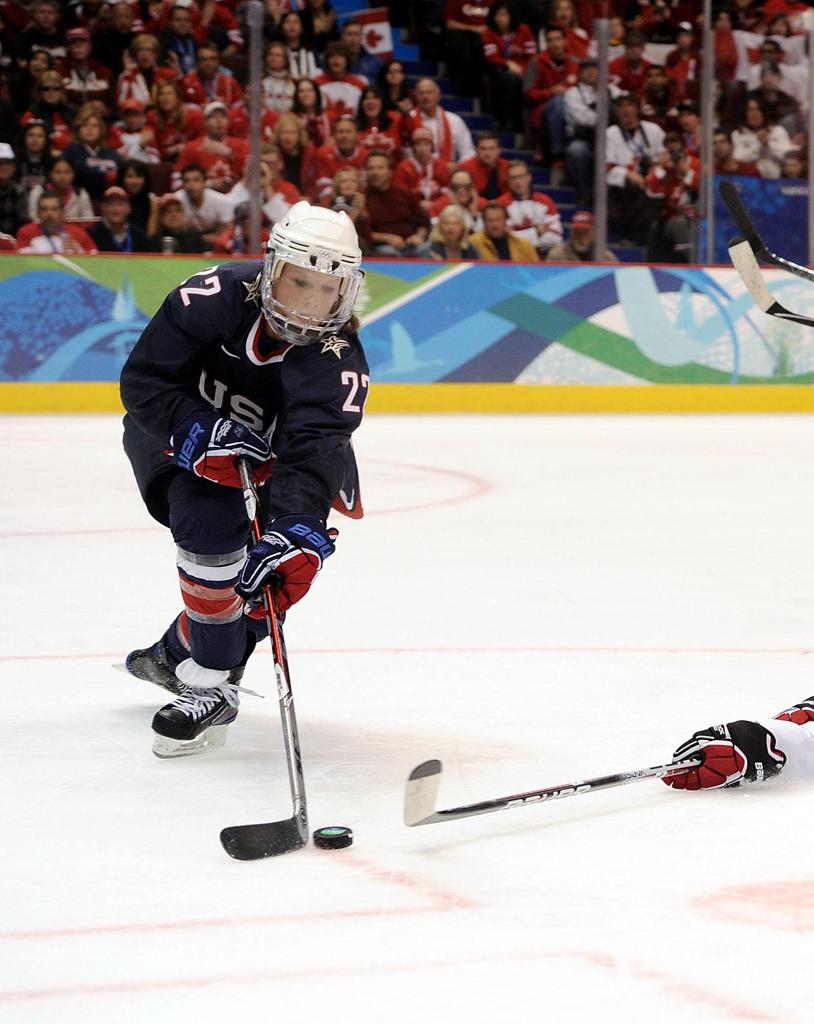 Kacey Bellamy during the gold-medal game against Canada at the 2010 Winter Olympics.

In addition to her time with USA Hockey, Bellamy has also played 10 seasons of professional hockey, including five with the Boston Blades (2010-15), where she helped the squad capture the Clarkson Cup in 2013; two with the Boston Pride (2015-16), where within the National Women’s Hockey League’s inaugural season, she helped the team win the Isobel Cup; one with Calgary Inferno (2018-19); and since 2019 within the Professional Women’s Hockey Players Association.

Bellamy enjoyed a four-year career at the University of New Hampshire (2005-09) where she earned many individual accolades and set records as a Wildcat defender. She finished her career with 107 points, including 27 goals and 80 assists in 143 games.