“We’re thrilled with the head coaches that will guide our teams at the upcoming Olympics and Paralympics,” said Pat Kelleher, executive director of USA Hockey. “We’ve said all along that our objective is to bring home three gold medals, and with the experience and leadership possessed by Mike, Joel and David, we know our teams are in good hands.” 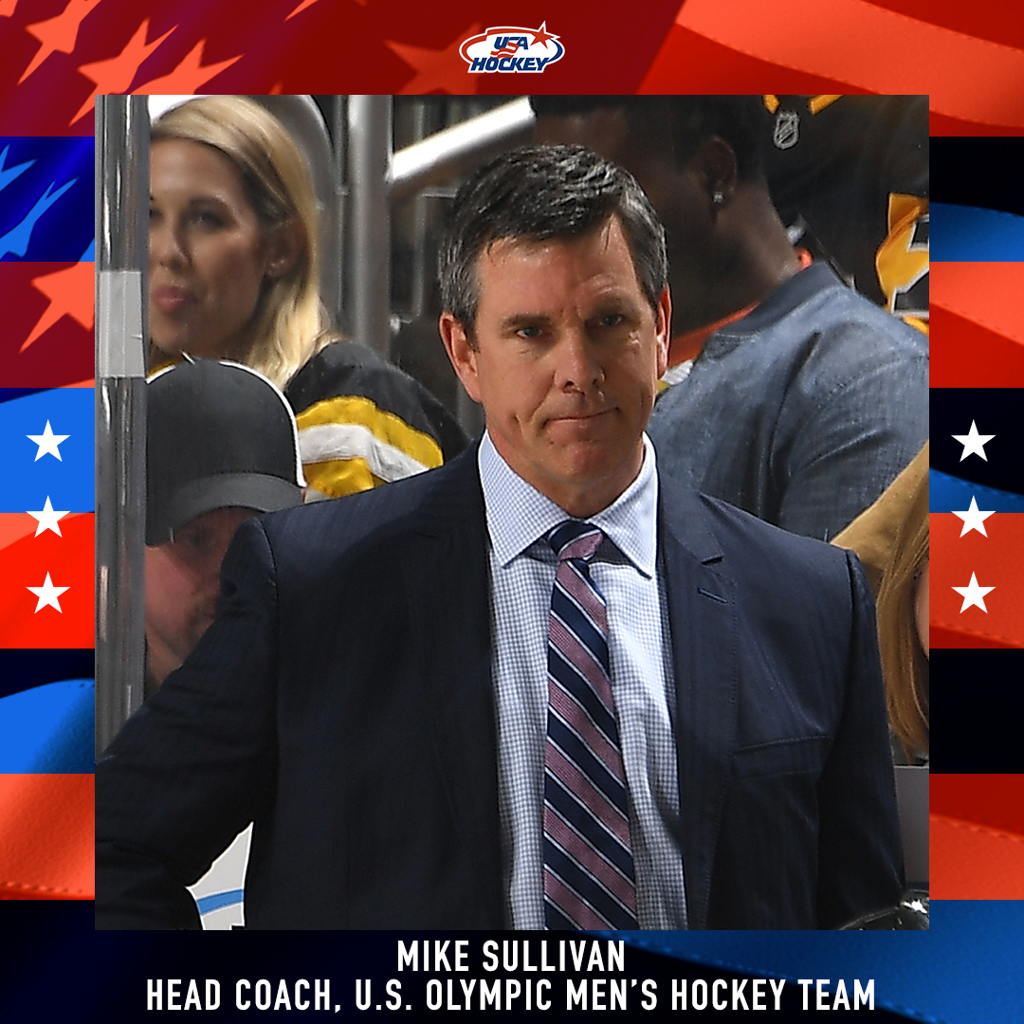 Mike Sullivan, who has been involved with USA Hockey in multiple capacities for parts of the last five decades, will serve as head coach of a U.S. Olympic Men’s Ice Hockey Team for the first time.

Sullivan, the head coach of the Pittsburgh Penguins, where he has led the NHL franchise to a pair of Stanley Cup titles during his tenure, most recently served as an assistant coach for Team USA in the 2016 World Cup of Hockey in Toronto.

Sullivan took over as head coach of the Penguins in December of the 2015-16 season and led the club to the Stanley Cup title. He guided Pittsburgh to a 33-16-5 regular-season record and became the sixth head coach in NHL history to win the Cup after being hired mid-season. He also coached the Penguins to the Stanley Cup title the following season to become the first American-born coach in NHL history to win multiple Cups.

Sullivan, who has been a speaker at multiple USA Hockey coaching clinics, began his professional coaching career in 2002 with the Boston Bruin’s AHL affiliate Providence Bruins.

As a player, Sullivan represented the U.S. on two occasions—once as a member of the 1988 U.S. National Junior Team and also as a member of the 1997 U.S. Men’s National Team. He played collegiate hockey at Boston University (1986-90), and, professionally, spent parts of 12 seasons with the NHL’s Boston Bruins, Calgary Flames, Phoenix Coyotes and San Jose Sharks. 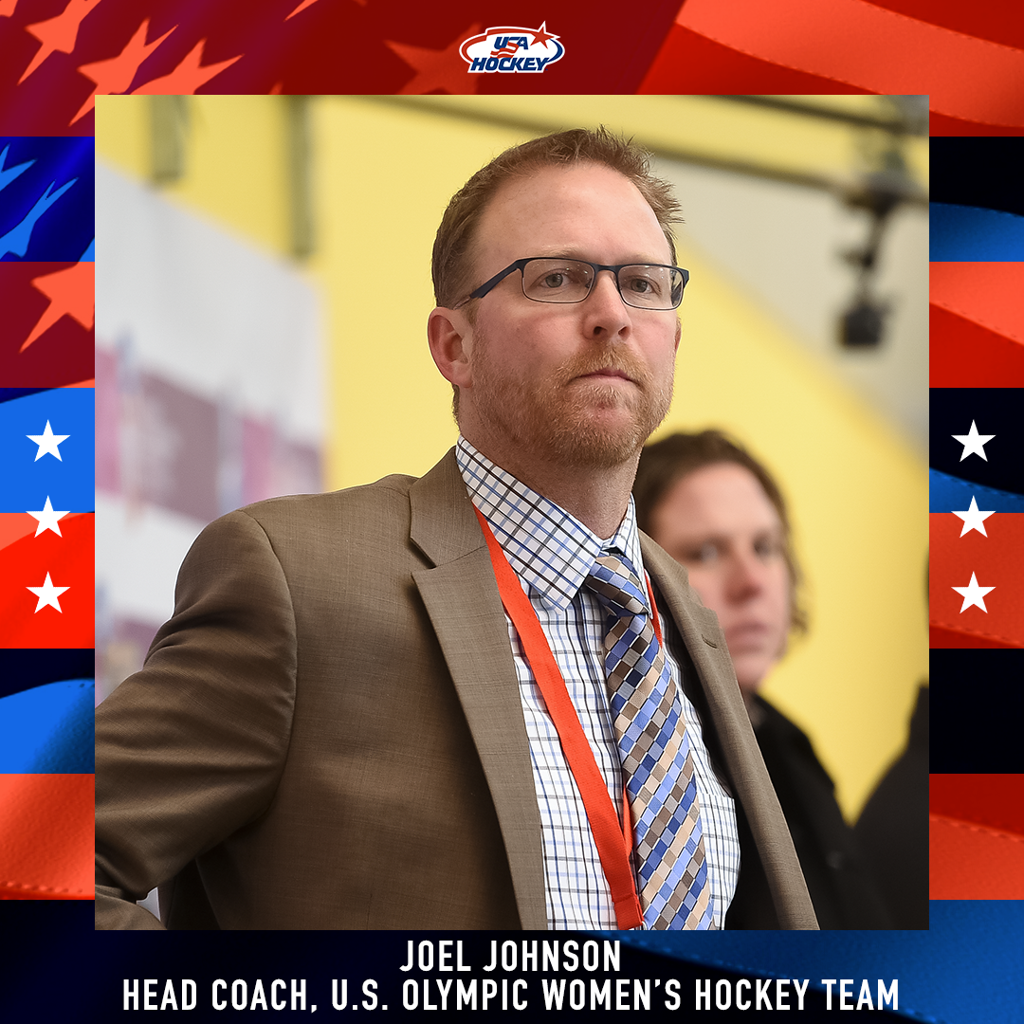 Joel Johnson, with more than 20 years of collegiate coaching experience and the current head women’s ice hockey coach at the University of St. Thomas in St. Paul, Minn., will be guiding his first-ever Olympic team but is no stranger to the international stage.

Johnson has also served as head coach of the U.S. Under-22 Women’s Select Team on two occasions for the U22 Series against Canada, leading Team USA to a three-game sweep in 2018 and a 2-1 series victory in 2019.

Johnson, who will serve as head coach of the 2021 U.S. Women’s National Team at the upcoming IIHF Women’s World Championship in Calgary from Aug. 21-30, made his U.S. Women’s National Team debut as an assistant coach in 2018-19 and helped guide the U.S. to its fourth straight Women’s Four Nations Cup title that season, as well as the gold medal at the 2019 IIHF Women’s World Championship in Espoo, Finland.

Johnson’s collegiate coaching journey includes two stints (1999-2004 and 2010-2021) over 16 years as either assistant or associate coach for the University of Minnesota women’s ice hockey program in addition to six seasons (2004-2010) coaching men’s ice hockey, soccer and golf at Bethel University.

During his first stint with the Gophers, Johnson helped the Gophers to national championships in 2000 and 2004 in addition to WCHA titles in 2002 and 2004.

He left Minnesota to coach at his alma mater, Bethel University, for six seasons (2004-10), including three years as the head men’s ice hockey coach. Along with his hockey responsibilities, he was also the men's and women's golf coach, and prior to that, was the soccer coach where he earned MIAC Coach of the Year honors. 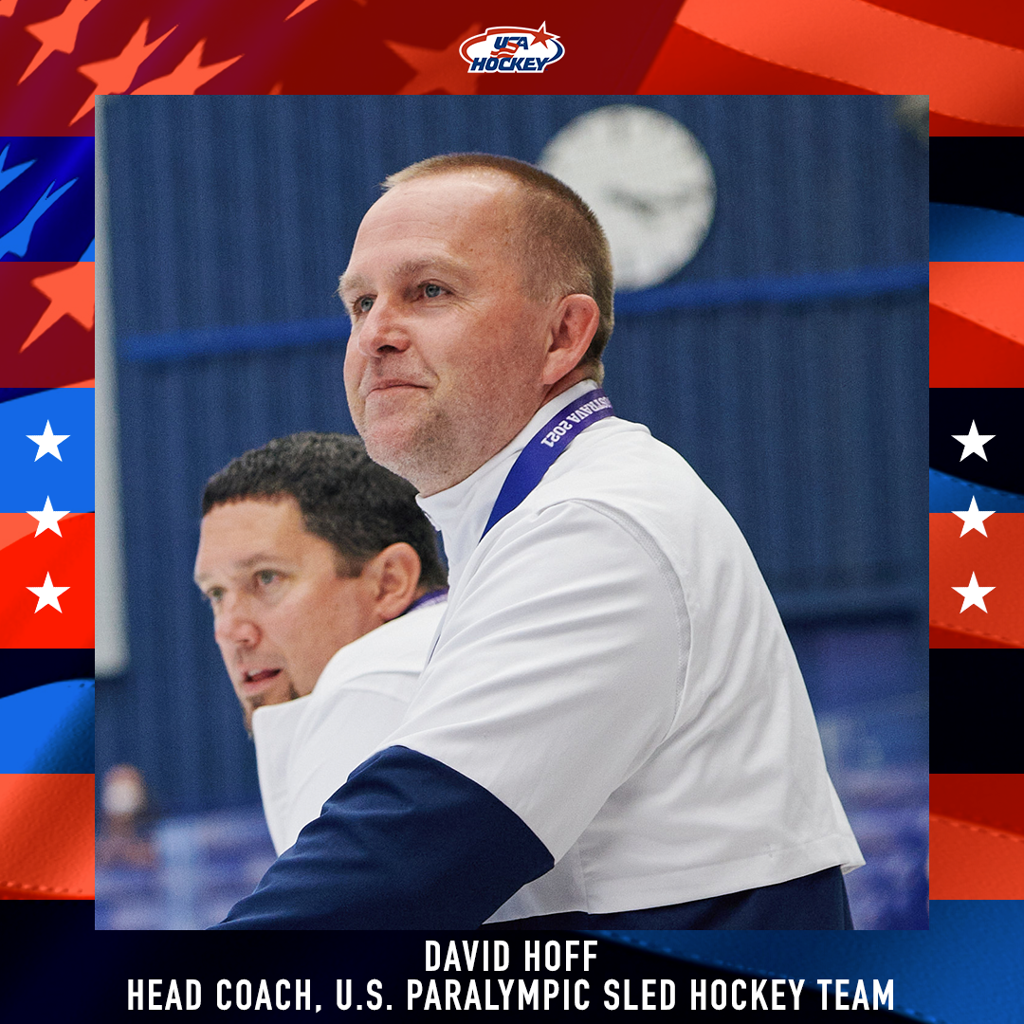 In his debut season as bench boss, Hoff coached Team USA to a 10-1-0-1 (W-OTW-OTL-L) record, including an undefeated 4-1-0-0 (W-OTW-OTL-L) mark at the 2019 Para Ice Hockey World Championship in Ostrava, Czech Republic. He added a second world championship gold medal to his resume after guiding Team USA to a top-of-the-podium finish at the 2021 IPC Para Ice Hockey World Championship in Ostrava, its record fifth gold medal in world championship history.

Hoff has previously been part of the coaching staff of a U.S. Paralympic Sled Hockey Team, serving as an assistant to Guy Gosselin at the 2018 Paralympic Winter Games where the U.S. captured an unprecedented third-straight Paralympic gold medal in PyeongChang, South Korea.

Hoff’s engagement with USA Hockey stems beyond his responsibilities with the U.S. National Sled Team program. For over a decade, he has also been dedicated to USA Hockey's Coaching Education Program, serving as the Northern Plains District Coach-In-Chief.

“Mike is a proven winner and has been involved with USA Hockey on the international stage on many occasions. He knows what it takes to get a team ready in a short tournament and we could not be happier to have him as our head coach as we look to bring home gold.”

“We’re excited to have Joel coach our Olympic team. He knows the player pool extremely well and brings the experience, passion and standard of excellence needed to win on the international stage.”

“David is an outstanding coach and human being. We are fortunate to have him guiding our team in the Paralympics. He cares about the players and has done a terrific job leading our team since taking over as head coach in 2018.”