Next World Championship Opportunity will Have to Wait for Savannah Harmon

2020 was setting up to be a big year in a USA Hockey sweater for blueliner Savannah Harmon.

After representing the U.S. Women’s National Team against Canada in the 2019-20 Rivalry Series, Harmon was equally ecstatic in February when she was named to the roster for her first-ever IIHF Women’s World Championship.

But then, the coronavirus pandemic struck and the IIHF canceled the tournament.

“Making the roster, I was super excited, and the last thing you would think is that it’s going to be canceled,” Harmon said. “It was a tough pill to swallow, but at the same time, you realize the bigger things going on in the world and how important it is that we are all staying home, staying safe and helping to get this thing under control. I was definitely looking forward to it though.”

Harmon, a Downers Grove, Illinois, native, made the roster for the last three games of the five-game Rivalry Series in February. Soon after, she received the call that she would be playing in her first world championship, which was scheduled for March 31-April 10 in Halifax and Truro, Nova Scotia.

“Getting off the phone call, I was super excited to tell my family, super honored and ready to get back to work leading up to the tournament,” Harmon said.

Previously, Harmon skated in the first three-game installment of the Rivalry Series against Canada in February 2019, which featured two games in Ontario and one in Detroit.

“It was my first time ever wearing the U.S. jersey and that is pretty hard to put into words, just what an honor that is,” Harmon said. “I think that was motivation moving forward because I always wanted to get back and to be able to put myself in a position to do it again. When the opportunity presented itself, I was just happy to be there, I really took in the moment and wanted to make sure I was playing my best hockey.”

Harmon’s first game back with the national team came February 3, 2020 in Victoria, British Columbia. She made a significant impact, scoring her first-ever national team goal in the third period.

“That goal was kind of surreal,” Harmon said. “I had a big smile on my face. If I think back on the play, that goal wouldn’t have happened without the work of my teammates. It was definitely a team effort and I got the end of it.” 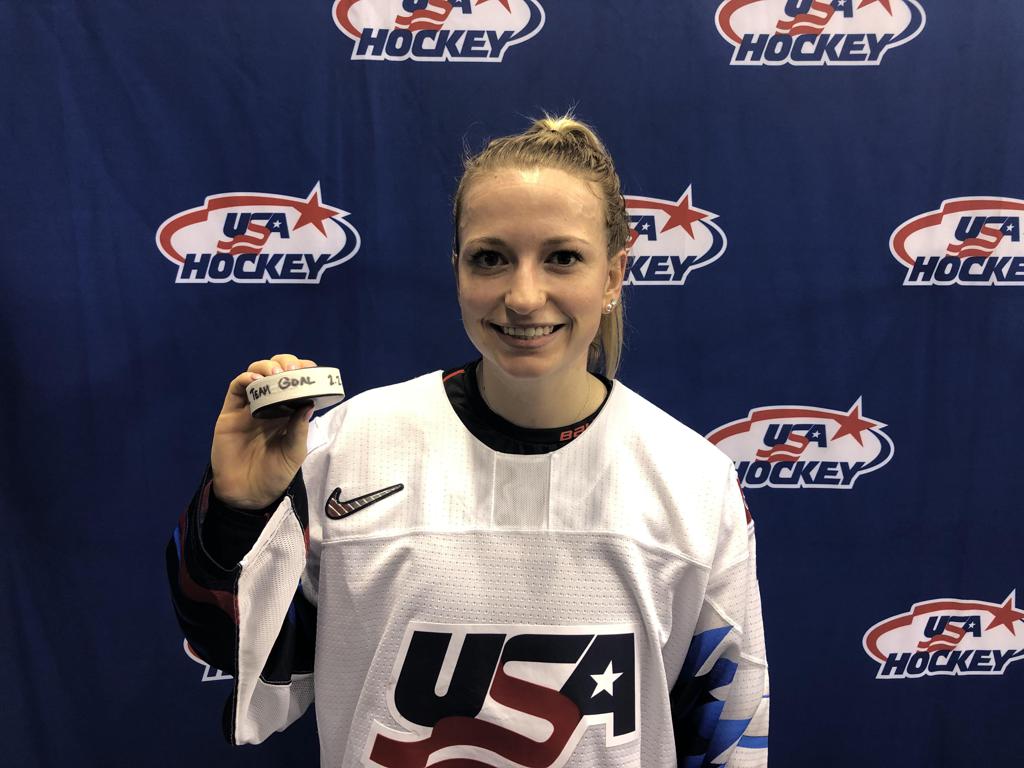 Harmon poses for a photo after netting her first goal with the U.S. Women's National Team in a matchup against Canada on Feb. 3, 2020

Harmon also spotlighted a 4-3 win five days later against Canada at the Honda Center in Anaheim. The U.S. and Canada played in front of 13,320 fans, which set a record for the most-attended women’s national hockey team game ever played on U.S. soil. 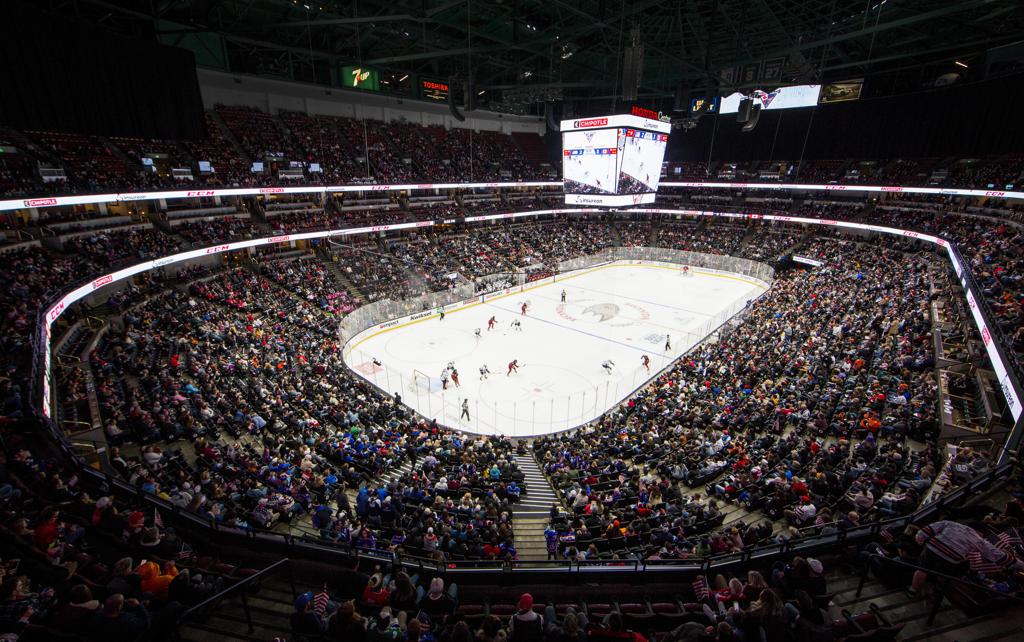 “That obviously has to be my favorite game,” Harmon said. “We set an attendance record and I had a bunch of family in the stands that traveled out. It was just an amazing event and team to be part of.”

Harmon’s time in college at Clarkson University and then with the Buffalo Beauts of the National Women’s Hockey League (NWHL) helped her reach this point. She was the No. 6 overall pick in the 2017 NWHL Draft and played one season in Buffalo.

“It was amazing [at Buffalo] and it was the next step, getting to play professionally,” Harmon said. “We had the best coaches and I was working with a defense-specific coach, who I still ended up working with all year, and I think that really helped me change my game and elevate me to the next level.”

At Clarkson, Harmon was a co-captain as a junior and captain as a senior, helping the Golden Knights win back-to-back national championships.

During her junior year, Harmon scored the game-winning goal in Clarkson’s 3-0 win against Wisconsin, as the Golden Knights won their second national title in school history. The following year, Harmon was a top-10 finalist for the 2018 Patty Kazmaier Award, presented to the top women’s college hockey player in the nation, and helped Clarkson to its second consecutive national championship.

“My four years at Clarkson were amazing,” Harmon said. “I came in as a freshman and spent each year developing and getting better not only on the ice, but as a person, too. It helped me gain confidence in my game and pushed me to the next level.”