COLORADO SPRINGS, Colo. – Meghan Duggan (Danvers, Mass.), who was a mainstay of the U.S. Women’s National Team program for more than a decade and led the U.S. to unparalleled success on the international stage during a decorated career, announced her retirement today.

The three-time Olympian not only captained Team USA to gold at the 2018 Olympic Winter Games, but her seven gold medals in world championship play represent the second most of any player in U.S. Women’s National Team history. She is among just 12 players to have been named to three or more U.S. Olympic Women’s Ice Hockey Teams.

“Meghan has made an incredible impact on hockey in America,” said Pat Kelleher, executive director of USA Hockey. “The success she helped our teams to over the course of her storied career is unprecedented and it’s great to have her continuing involvement as a member of our board of directors. We wish her the very best and thank her for the many contributions she’s made to USA Hockey and our Women’s National Team program.”

Duggan has not played for the U.S. since the 2018 Olympic Winter Games, taking time away to start a family. She gave birth to her first child – George Robert Apps-Duggan – on Feb. 29, 2020.

“I am incredibly thankful and humbled by the opportunities I’ve had throughout my hockey career,” said Duggan. “At the core of those experiences are people; my family, teammates, coaches, support staff, organizations, fans, and the next generation of players: you have all changed my life, thank you.

“It’s been one of the greatest honors of my life to represent my country on the world stage and hockey has given me memories I will cherish for a lifetime.”

“The team you see today and the culture that exists within our program is a direct reflection of Meghan’s dedication and hard work,” said Katie Million, director of women’s national team programs for USA Hockey. “Meghan’s leadership wasn’t just seen, it was felt by every single teammate. She embodied the values of Team USA on and off the ice and will be greatly missed. Thank you, Meghan, for your unwavering dedication and commitment to this team as well as helping forge the way for the next generation.” 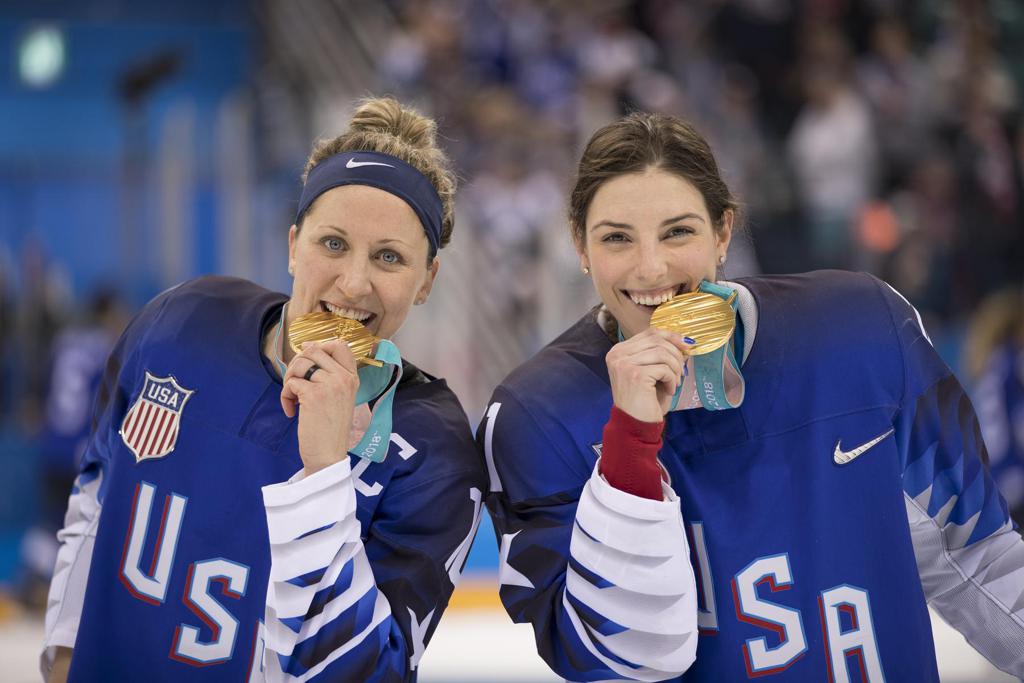 Duggan captained Team USA to gold at the 2018 Winter Olympics.

U.S. WOMEN’S NATIONAL TEAM
Duggan began her career with the U.S. Women’s National Team in the 2006-07 season and was selected as a member of Team USA for the 2007 International Ice Hockey Federation Women’s World Championship that season following the conclusion of her rookie campaign at the University of Wisconsin. She played in all five games in the world championship and helped the U.S. capture the silver medal. The forward went on to play in seven other world championships (2008, 2009, 2011, 2013, 2015, 2016, 2017), each time helping the U.S. capture a gold medal.

Duggan made her Olympic debut at the Winter Games in Vancouver, B.C., in 2010 where the U.S. captured silver. She was the captain of the 2014 team in Sochi, Russia, where the U.S. also gained silver, before captaining the 2018 gold-medal team in Pyeongchang, South Korea.

During her career, the U.S. Women’s National/Olympic Team was recognized with numerous honors, highlighted by being named by the U.S. Olympic and Paralympic Committee as the Olympic Team of the Games in 2018 and also as its Team of the Year in 2017. In addition, ESPN bestowed the ESPY Award for Best Game to the 2018 Olympic Team for its gold-medal overtime win over Canada and named the 2018 National Team its Sports Humanitarian Team of the Year.

COLLEGE HOCKEY
Duggan enjoyed an outstanding four-year career at the University of Wisconsin (2006-09/2010-11) where she helped the Badgers to three NCAA Division I national championships (2007, 2009, 2011) as well as one runner-up finish (2008). She finished her career with 108 goals, 130 assists and 238 points in 159 games. Among her many accolades, Duggan won both the Patty Kazmaier Memorial Award as the top player in NCAA Division I women’s ice hockey and USA Hockey’s Bob Allen Women’s Player of the Year Award in 2011 in her senior year.